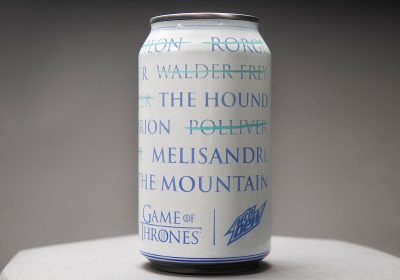 The upcoming final season of Game of Thrones doesn’t simply mark the end of one of the most popular series currently on television. It’s also the last chance for brands to parlay the show’s success into marketing opportunities (until the inevitable nostalgia comes around, at least). So it’s not surprising that plenty of companies have gotten on the Game of Thrones promotional bandwagon in the lead up to its April 14 season premiere. Brewery Ommegang was, of course, back with a new beer. Spirits giant Diageo has rolled out an entire lineup of GoT Scotch whiskies. Even Oreo is releasing a Game of Thrones edition (because cookies are a perfect pairing for graphic sex and violence!)

Now, “Mtn Dew” and HBO have announced an official GoT partnership — bringing together more three-letter words and abbreviations than possibly ever before! Brace yourself though, because this high-concept campaign is nearly as complicated as Game of Thrones’ family trees.

The soda brand says it’s “making the ultimate sacrifice #ForTheThrone” by releasing a limited-run of special-edition Mtn Dew cans that are completely white—dubbed “A Can Has No Name”—“inspired by beloved character Arya Stark and her training with the Faceless Men of Braavos.”

But turns out the cans are more than meets the eye. “When warm, the cans appear brandless; once chilled, they reveal Arya’s iconic kill list, a tribute to those killed and a glance at her remaining targets for the final season,” Mtn Dew explains. The cans manage this disappearing and reappearing act thanks to “thermodynamic ink, which is temperature sensitive and allows for colors to change when chilled.”

However, scoring one of these cans requires a bit of sacrifice of your own. Mtn Dew has turned to social media to ask Game of Thrones fans and Mtn Dew drinkers “what they would do #ForTheThrone.” To translate, if you want to win a can, you have to go to either Facebook, Instagram, or Twitter and find the link for the online registration form (the method is slightly different for each platform). Once you’ve filled it out, you’re eligible to win one of 800 of these color-changing cans.

Or if running around a big city is more your speed, Mtn Dew also says that you “can also score one of the limited-edition cans in New York City and Los Angeles in the coming days by finding the ‘Masters of Coin,’ uttering the ancient password, and receiving a coin.

The Masters of Coin will then lead [you] to a designated ground where the coin will dispense a can from our Iron Vending Machine.” More details on how to do that will appear… where else… on social media.