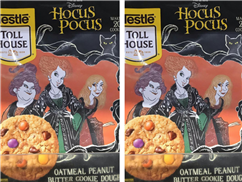 Though in some ways it feels like we’re roughly 150 days into March, we’ve now reached August 2020, the longest year of all time. But just because time as we used to know it has all but ceased to exist doesn’t mean that the onslaught of pumpkin-spiced things and other Halloween-themed treats will stop. Right on schedule, Nestle’s now showing off a Disney-themed cookie dough that should be perfect for staying inside, baking, and watching TV this October.

In an effort to make 2020 a bit more tolerable, Nestle Toll House now has its own Hocus Pocus-themed cookie dough, news that is sure to elicit a few “YAAAAAAAS”es from fans of the cult classic Halloween film that seems to play on a constant loop every October.

The dough itself makes perfect oatmeal peanut butter cookies. Fittingly, there’s a bit of candy in this Halloween-themed cookie dough as well. As the packaging notes, that means white chocolate morsels and “candy-coated gems” (essentially M&M’s, it seems) in purple, orange, and yellow, each representing the hair color of one of Hocus Pocus’ magical Sanderson sisters.

At this point, you may be wondering why there’s a cookie dough themed around a live action Disney movie that came out almost 27 years ago. As it turns out, there’s a Hocus Pocus sequel in the works that’s headed to Disney+ at some point. Of course, news about Adam Shankman signing on to direct surfaced in early March, so filming has presumably been delayed at this point. Hopefully it’ll be out in time for October 2021.

In the meantime, you could sure do worse than baking these cookies while watching Hocus Pocus on a month-long loop. Each 14-ounce package should help you make up to 20 cookies for a price that’s probably less than a month of Disney+. At the very least, you can get a decent Instagram story out of baking these while the movie’s on.