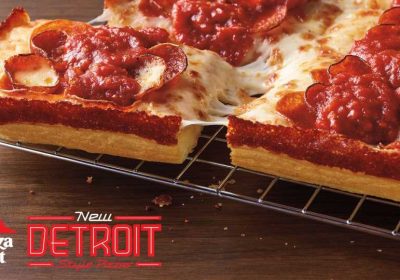 Update, January 26, 2021: Hi, hello! Are you sick of cooking? I know I am. Let me introduce you to a little concept I like to call “ordering a pizza for dinner!” But in case you’re sick of ordering that same-old, same-old, Pizza Hut has quite the treat for you! The chain announced today that it’s rolling out its Detroit-Style pizza nationwide and frankly? It’s gonna blow your mind.
Following the hush-hush test run we wrote about last year, as well as Pizza Hut trying more than 500 iterations of the iconic pizza style, they’re finally rolling out Detroit-style pizza nationwide! As you might imagine, each pizza is rectangular and, true to Detroit-style, features cheese all the way to the edges to create a crispy caramelized crust. It’s also topped with a new vine-ripened tomato sauce that’s only available on this pizza.
As for toppings, you can choose from the Detroit Double Pepperoni, topped with 32 slices of regular pepperoni and another 48 slices of Crispy Cupped Pepperoni. That’s 80 slices of pepperoni in case you’re bad at math like I am!! You can also get it in Double Cheesy, Meaty Deluxe (which is made with bacon, Italian sausage, and Crispy Cupped Pepperoni), as well as Supremo, which is topped with Italian sausage, red onions and green bell peppers. I think it’s clear you cannot really go wrong with any of these!
We got a chance to give this pizza a try and it’s really pretty amazing. Though the pizza is smaller than what you’re used to from Pizza Hut, each slice is thick, comforting, and delicious, so one or two slices is probably plenty! If you’re a fan of sweeter sauce, you’ll love this pizza and if you love a crunchy crust? Yeah, order this now. Oh, and great news—it also reheats super well!!
You can get a Detroit-style pizza for a limited time at participating Pizza Hut locations starting at $10.99. Does this mean pizza wars are the new chicken sandwich wars? Because we’re so into that.
Original, March 10, 2020: Everybody has their opinions about what kind of pizza is best and, frankly, it’s a boring argument. Pretty much all pizza is good in its own special way and each serves its own particular purpose. But throw what you know about pizza out the window because Pizza Hut has been spotted selling a style of pizza that it has never done before.
Some Pizza Hut customers have spotted the chain selling Detroit-style pizza, according to Chewboom. If you’ve never been lucky enough to have a slice, Detroit-style pizza is typically a rectangular pizza with square slices. It has toppings on its edges, resulting in a crispy, delicious caramelization.
As for Pizza Hut’s version, well, it’s characterized by a few terms “Crispy Crust. Extra Cheese. Toppings to the Edge.” You can get the chain’s Meat Lover’s or any of its specialty pizzas on the crust. YouTuber 1EyedPheonix showed a video of the pizza, which appears to have first been spotted in late 2019.
The pizza is reportedly available as an eight-slice pie for $12.99. It’s also available in a double pizza made up of 16 slices for $19.99 and a triple pizza made up of 24 slices for $24.99.
The bad news is this is not available everywhere. It appears to be a regional offering in select locations in Ohio and Michigan, but if you’re located near there, it could be worth asking about it the next time you order from Pizza Hut.
For everyone else, do a quick Google and try to find a Detroit-style pizza place near you. If you’re really hungry, you cannot beat it.
Source: Read Full Article