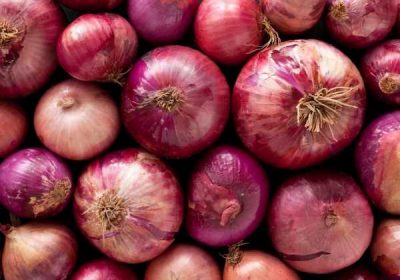 UPDATE: August 3, 2020 — Thomson International has released details of their onion recall. In the FDA statement detailing the recall, the company writes, "Thomson International Inc. of Bakersfield, California is recalling Red, Yellow, White, and Sweet Yellow Onions shipped from May 1, 2020 through the present. The onions are being recalled because they have the potential to be contaminated with Salmonella, an organism that can cause serious and sometimes fatal infections in young children, frail or elderly people, and others with weakened immune systems."

The onions in question were distributed to all 50 states, the District of Columbia, and Canada, the statement says. Currently, infections caused by the onions have been reported in 34 states and Canada.

The onions were distributed under names like Thomson Premium, TLC Thomson International, Tender Loving Care, El Competitor, Hartley's Best, Onions 52, Majestic, Imperial Fresh, Kroger, Utah Onions, and Food Lion. They were sold in cartons between 5 and 50 pounds and mesh sacks between 2 and 50 pounds.

Thomson encourages consumers who cannot guarantee where their onions came from to throw them out. Also, disinfect any surfaces that may have come into contact with the onions. If you have questions, consumers may contact Thomson International by calling Kim Earnshaw at 661-845-1111.

EARLIER: For several weeks, scientists and food safety experts in the U.S. have been investigating a multistate outbreak of salmonella poisoning that has sickened 396 people in 34 states and sent 59 to the hospital. Friday night, the Food and Drug Administration reported their traceback investigation had identified the probable culprit: red onions.

Thomson International, a food supplier in Bakersfield, Calif., is the likely source of those particular onions, but as of the time the FDA announced the findings of their investigation, Thomson International had not issued a recall. However, they indicated to the FDA and other state and local health agencies that they would issue a recall. They added that they're likely to recall red, white, yellow, and sweet onions that may have come into contact with the contaminated red onions, not the implicated red onions alone.

"Although the investigation has determined that red onions are the likely source of this outbreak, Thomson International, Inc. has notified FDA that it will be recalling all varieties of onions that could have come in contact with potentially contaminated red onions, due to the risk of cross-contamination," the FDA's statement read.

The outbreak began June 19, and new cases linked to the onions were reported through July 12, the Centers for Drug Control and Prevention previously said. So far, 396 people have reported cases of salmonella poisoning, and 59 have been hospitalized. No deaths have been linked to the outbreak.

The FDA's announcement came on the heels of a similar notification from Canadian health officials, who reported they have linked 114 cases of salmonella poisoning to red onions from a U.S. supplier. There, the agencies had traced the onions back to use in home cooking, restaurant menu items, and residential care settings. They too report zero deaths as a result of the infections.

If you aren't sure where your onions came from, the FDA suggests you throw them out to be safe.

"FDA recommends that anyone who received or suspects having received onions from Thomson International, Inc. use extra vigilance in cleaning and sanitizing any surfaces and containers that may have come in contact with these products to reduce the risk of cross-contamination. This includes cutting boards, slicers, countertops, refrigerators, and storage bins," the agency said in their statement.

Symptoms of a salmonella infection, also called salmonellosis, may begin to show within 12 to 72 hours after you eat the contaminated food. These signs might include diarrhea, fever, and stomach cramps. More severe symptoms of an infection include blood in stool or urine, lethargy, aches, headaches, higher fever, and rashes. In some cases, the infection can be fatal.

Most people, however, will recover from the illness without medical treatment. Children under 5, people over 65, and those with a weakened immune system face greater risk for severe illness.

If you think you were sickened by red onions, talk with your doctor or clinician. Write down what you ate and when, as well as symptoms you experienced. If warranted, they can help connect you with health investigators, who are still investigating the outbreak and its impact.

This article originally appeared on Allrecipes.com