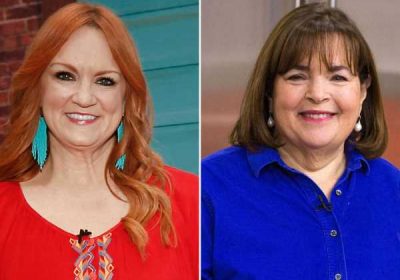 Ree Drummond may be a huge Food Network star in her own right, but there’s still one celebrity chef that leaves her starry-eyed. The Pioneer Woman star, 50, revealed that Ina Garten is her go-to choice for a future collaboration.

“If I had to pick one, it would be tough. But my longtime love is Ina Garten,” she told Fox News. “I’ve loved her since she started her show.”

“I’ll cook with anyone as long as they’re willing to come to me!” added the Pawhuska, Oklahoma native, noting that she also “absolutely loves” Food Network Star winner Eddie Jackson.

Garten, 71, has starred on Barefoot Contessa, based on her cookbook of the same name, on the Food Network since 2002.

She’s amassed plenty of celebrity fans over the years, including Taylor Swift, who penned a touching tribute to Garten for TIME‘s 100 Most Influential People issue, Meghan Markle, who once gushed over Garten’s roasted chicken recipe, and Gwyneth Paltrow, who traveled to Garten’s Hamptons home to make brunch for a post on her website Goop.

WATCH: This Is the Pioneer Woman's Go-To Weeknight Dinner Recipe

Drummond, meanwhile, built her very own Pioneer Woman empire based on her blog of the same name in 2006, and has since grown the brand to include cookbooks, a TV show, a lifestyle magazine, a hotel and more.

The Oklahoma-based star has had a busy year, recently teaming up with Purina for a line of dog treats in fun flavors like Chicken Parmesan and Bacon, and Maple and Apple Waffles. She also launched a new line of ranch dressings, pasta sauces and barbecue sauces inspired by life with a house full of teenagers (Drummond and her husband Ladd are parents to Alex, 21, Paige, 19, Bryce, 16, and Todd, 15).

“It had to knock my socks off,” she told PEOPLE of partnering with Kraft Heinz to perfect the ranch.

The sauces, meanwhile, offer a variety of flavors, including Apple Brown Sugar and Peach Whiskey for the barbecue, and Rustic Bolognese and Four Cheese for the pasta sauces. As if her plate wasn’t full enough, Drummond is also gearing up for the release of her sixth cookbook, New Frontier, which hits shelves in October and will feature recipes that cut back on grains and sugar.

“[It’s] not a keto cookbook or a low-carb cookbook,” she told PEOPLE in April, “[but it’s full of] suggestions for how to lighten up an otherwise really carb-heavy dish. It’s been really fun to come up with versions of really delicious dishes that you can take a few steps to make them lower in carbs.”