Taco Bell Is Getting Its Own Wine to Pair with Chalupas 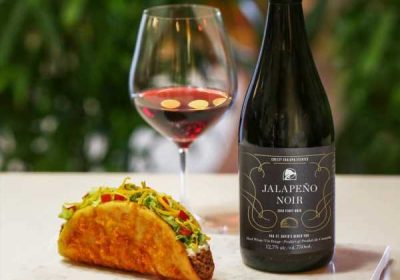 Taco Bell has long been a favorite dining destination after a night of drinking. (Students in State College, Pennsylvania even held a candlelit vigil when a location closed in town.) More recently, however, the Tex-Mex chain has been dabbling in alcohol of its own. Since 2015, Taco Bell has been expanding its “Cantina” concept which sells margaritas and other boozy concoctions. And in 2017, the brand even released its own branded beer, Beach Bell Lager. But here’s something you may have never thought you’d see: An official Taco Bell wine.

No, this new wine isn’t served in a wrapper. In fact, to the contrary, you may want to show this limited-edition bottle off. Jalapeño Noir, as the new vino is called, is a Pinot Noir produced by Queenston Mile Vineyard in the increasingly popular wine producing region of Niagara Peninsula in Ontario, Canada. The winery’s Pinots usually retail for about $30 in U.S. dollars—and though Taco Bell’s offering will be cheaper, closer to $20, the chain definitely isn’t aiming for value. Silly name aside, Jalapeño Noir is a legitimate release.

Sadly, as you may have now surmised, the new wine is (for now at least) only being released in our neighbor to the north, tied to Taco Bell Canada’s introduction of the new Toasted Cheesy Chalupa. As the brand explains, the new chalupa variation features “six-month aged sharp cheddar cheese toasted onto the iconic chalupa shell to create a crispy blanket of flavour and texture” which should pair well with “notes of wild strawberry, cherry and beetroot in this silky limited-edition red wine.”

“Wine and cheese are simply meant to be together, so launching a new wine to go with the craveable, cheddary Toasted Cheesy Chalupa made perfect sense,” Kat Garcia, the company’s director of brand marketing, said in the announcement. “At Taco Bell Canada, we love to raise our glass to big, bold ideas that elevate our menu items, and pairing our Toasted Cheesy Chalupa with this Jalapeno Noir is no exception.”

The wine—which will be sold with three different labels to encourage collecting—will go on sale on September 16. Ontario residents can purchase a bottle on Taco Bell’s website or from select locations in Hamilton and Toronto via Uber Eats, while supplies last.

As a final jab at American Taco Bell fans, Taco Bell Canada concludes their announcement by stating, “The Toasted Cheddar Chalupa will also be available in the U.S. in November.” Any additional details on whether we’ll be getting a Taco Bell wine that is “simply meant” to pair with our chalupas is conveniently left out.