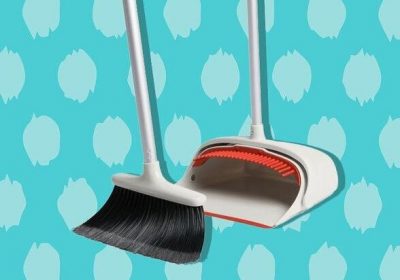 Keeping a home spick-and-span is a top priority for many. While there are so many available cleaning tools, from vacuums to carpet shampooers, those heavy (and sometimes expensive) gadgets aren't always necessary to lug out for quick cleanups. However, the OXO Large Sweep Set easily removes dust, hair, and debris from floors with one ingenious feature that Amazon shoppers say makes it a "lifesaver."

OXO is known for upgrading everyday household products with clever elements that make them stand out from the competition, and shoppers call this sweeper the "gold standard for broom and dustpan sets."

The full-sized broom has fanned-out bristles to cover large surface areas with minimal effort. Many shoppers love that the broom is designed with an extendable aluminum handle, which extends from 36 inches to about 55 inches and is a "real back saver" for taller folks who typically need to bend down while cleaning messes. The dirt-trapping dustpan has a retractable design that allows it to go from its vertical storing position into a horizontal stance when placed on the floor for cleaning. This genius feature allows you to move around the house without risking the escape of dust bunnies. It also has a flexible rubber lip along the edge, which means you won't get a leftover line of dirt you have to sweep up over and over. It's one of the many reasons why shoppers say this broom and dustpan set is "without a doubt the most superior one."

But the real star of the dustpan is its "teeth" that comb out any little particles that get stuck to the broom's bristles. That means hair, crumbs, lint, and dirt easily release from the bristles and go straight into the dustpan "instead of clinging for dear life." No more having to pick up stray debris and throw it into the trash by hand. Shoppers say the OXO Sweep Set is the Cadillac of kitchen brooms" thanks to its smart design and easy-to-use mechanism, earning nearly 2,000 perfect ratings and securing a spot on Amazon's best-seller list for household brooms. It is so loved that shoppers say they would buy it a second time. Luckily, since it's so durable, they don't have to.

"It's reliable, stands the test of time, and I would buy this over and over again," writes one Amazon shopper. "Let me tell you, this has been through two infants, a husband, and a cat. Two years later it is still the best thing I have purchased for my house."

Ready to trade in your old dingy broom? Join thousands of shoppers who love the OXO Large Sweep Set that upgrades your cleaning game and is "worth every penny and more."

Know what else is worth every penny? The Cooking Light Diet! Subscribe today and start receiving customizable meal plans—breakfast, lunch, snack, and dinner—for less than $2 per week.