Home » Food Trends » What Is Swiss Chard—and What Can You Do With It?

What Is Swiss Chard—and What Can You Do With It? 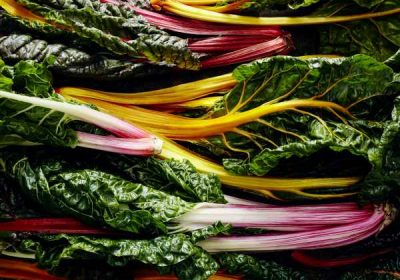 Mild, easy-to-cook, and incredibly healthy—here’s everything you’ve ever wanted to know about Swiss chard.

What Is Swiss Chard?

Swiss chard (also known as chard, silverbeet, spinach beet, perpetual spinach, crab beet, and mangold) is a green leafy vegetable that is related to both spinach and beets. Swiss chard actually has nothing to do with Switzerland—it actually originated in the Mediterranean. This misnomer can likely be attributed to the fact that it was first described by a Swiss botanist in the 1700s.

Chard, which is entirely edible, has green leaves with stalks that range in color from pale yellow to red. The leaves taste like a milder spinach, though they are still somewhat bitter. The stems are slightly sweet.

Though it’s often thought of as a winter vegetable since it tolerates frost better than other vegetables, Swiss chard also grows well in summer. Swiss chard is a highly nutritious vegetable. Its benefits are similar to those of kale, but its mild taste might be more appealing to some people.

How to Cook With Swiss Chard When you’re buying Swiss chard, look for a vibrant, unbruised, and firm vegetable with unwilted leaves. Chard cooks quickly and can be steamed or sautéed. It’s often served cooked in soups, stews, casseroles, frittatas, and quiches, and raw in salads.

Ready to get cooking? Try one of our favorite Swiss chard recipes: