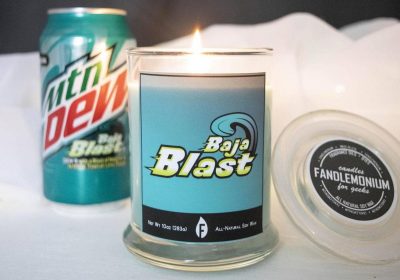 The past few months have been pretty rough for Taco Bell fans. COVID-19’s toll led the chain to develop a streamlined menu, which is a less hurtful way of saying lots of items were cut. August saw the disappearance of the 7-Layer Burrito, Triple Layer Nachos, any potatoes on the menu, and more, and Taco Bell started off September by announcing even more cuts. And while it is possible to make these items on your own, that doesn’t refute that it’s the end of an era. Sure, they’ve introduced a few new items like the Grilled Cheese Burrito and Crispy Cantina Melt, but this year will be remembered as the one when Taco Bell took away far more than what they gave.

But I’ve found something that Taco Bell can’t take away from us: this Baja Blast-inspired candle. Let’s be real. A substantial part of Taco Bell’s charm has to be credited to the niche Mountain Dew flavor with a cult following. And while Baja Blast is a mainstay at Taco Bell, the canned and bottled versions are infamously elusive. Mountain Dew obsessives track its availability via the Mountain Dew Reddit, but when you can’t find Baja Blast in stores, having your place smell like it is the next best thing.

Crafted by Fandlemonium, the Baja Blast-inspired candle has notes of coconut, lime, grapefruit, and lemon, as well as a bit of “sparkling effervescence.” The candle retails for $20.54, which isn’t too bad considering its one-of-a-kind scent. It’s the perfect way to add some Taco Bell-inspired vibes to your home, short of incorporating actual Taco Bell furniture into your personal office.