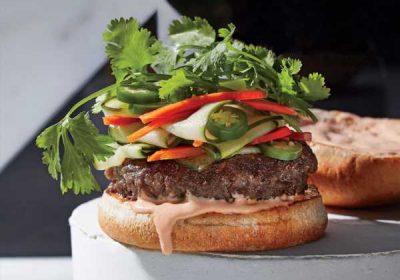 Floridians Thom and Darren Carlisle were never looking for a weight loss tool. The retired veterinarian and massage therapist, respectively, have spent their entire 21-year marriage prioritizing fitness. They're in the gym almost daily, with Darren staying in the weight room while Thom gravitates toward more group-based fitness like kickboxing classes. The Carlisles also ate healthy in conjunction with exercising, utilizing a meal-delivery service for 3 years. The meals were "ok" at best but far from swoon-worthy. And don't even get Thom started on the vegetables… Point being, the Carlisles knew how to take care of themselves. A teenager, though? Well, that's a horse of a different color. And when Thom and Darren decided to host a German exchange student for 10 months, they "realized we could not feed a teen microwaved dinners for a year." They needed a way to ensure almost a year's worth of breakfasts, lunches, and dinners could be healthy enough to tick their boxes while being delicious and filling enough to satisfy a 15-year-old named Lewe. But, how?

A New Healthy Routine for a New Family Member

Thom knew that the meal delivery service they'd used for the last three years wasn't the answer. He'd never really been enthralled by the meals and would either force himself to eat the included vegetables or just throw them straight into the trash. So if he couldn't fully appreciate those meals, a teenage boy wasn't going to, either.

Luckily, Thom had subscribed to Cooking Light magazine for years and had always enjoyed the meals. He'd never mastered the day-to-day planning, though, so he was thrilled to discover the Cooking Light Diet. The service married the recipes he loved with the ability to meal plan that he lacked. The early results were positive, with Thom cooking three meals a day directly from his Cooking Light Diet menus.

And then Lewe arrived.

…And that sentence was left as a standalone purely for dramatic effect because the results stayed positive.

Thom, Darren, and Lewe settled into a new, healthy routine thanks to the Cooking Light Diet. Meal plans were finalized on Thursdays and written out on the fridge so everyone knew what was on the menu. Grocery shopping happened on Sundays. During the week, Thom would spend around 30 minutes organizing and prepping each night, and then another 30 minutes or so cooking. They'd then gather as a family for dinner, with the meals being described by Thom as "swoon-worthy!" And then Thom would spend about 15 minutes cleaning the kitchen, packaging up the fourth serving of that night's dinner for Lewe to take as lunch the following day. Lather, rinse, and repeat for 10 months, and Thom became enamored by how easy and rewarding this routine was.

Thom was so enthralled that he continued utilizing the meals while he and Lewe trained to run a half-marathon with Thom's sister and nephew. One of Thom's favorite memories from training for said endurance race? Talking about the Cooking Light Diet, of course! His sister was also a subscriber, and their conversations were consumed with discussions about recipes, substitutions, and planning ideas. The benefits of Thom's Cooking Light Diet subscription went far beyond feeding Lewe and bonding time with his sister, though. After all, his relationship with food had been strained since childhood.

"My mom always worried about her weight and was always dieting," Thom said. "I think her 'dieting' left her feeling deprived, and then she'd give in to a binge. Myself and my six siblings rode that roller-coaster our whole life, and I think that contributed to our current relationship with food."

And that relationship would best be described in his own words as "frenzy feeding."

"I'd eat healthy until my brain started to obsess about something I felt deprived of, whether that be carbs, chocolate, eggs Benedict," Thom said. "Once my brain figures out a way to break my resolve, a taste then becomes a free-for-all, and I won't stop until I am stuffed."

But Thom credits the Cooking Light Diet for shifting the way he's able to now think about and approach food.

"[This] has allowed me to think about food constantly," Thom said. "I can think about it while planning my week, shopping, and cooking. The result of my efforts is a delicious, appropriately sized portion made with healthful ingredients. My brain doesn't get stuck in a 'must break deprivation barrier' cycle anymore."

Not to mention Thom's finally able to appreciate vegetables for the first time in his life, which is no small feat consider their sordid beginning.

"My parents typically served vegetables straight from a can," Thom recalled. "And we'd have to clean our plate. Canned asparagus split seven ways…need I say more?"

Basically, eating a leaf of spinach used to make Thom feel like he was being poisoned. Now? His conditioning in terms of vegetables has changed "dramatically," and the little learnings he's picked up making these recipes have "enhanced the actual and natural goodness" of veggies like parsnips and chard. The man went from canned asparagus to preparing chard for teenagers, for crying out loud! Someone get him a medal.

Lewe Back in Germany, But Routine Never Left

With the meal planning all squared away, Thom and Darren were able to seamlessly host Lewe for his 10-month exchange. They ran a half-marathon. They took him to exercise classes. They did it big for Halloween. "Halloween is always an event at our house," Thom said. "We rent a bouncy house to set up in our front yard, we set up a table of food and beverages for the chaperoning parents, and we give FULL-SIZE candy bars out to the kids."

[Note to self: Spend next Halloween in Safety Harbor, Florida.]

And they made a gingerbread house for Christmas. Lewe is back in Germany now, but the Carlisles are still going strong down in Safety Harbor. Thom and Darren are training for a Tough Mudder-type event. The bouncy house has been rented for another Halloween, and the full-size candy bars have been acquired. Oh, and that new healthy eating routine? It didn't leave. Thom plans to continue using the Cooking Light Diet going forward. And in a society that's so food-driven, he encourages others to do the same.

"We think about food all the time. We watch cooking shows, drive by ads selling it all the time, and so on. Wouldn't it be great if you could change the way you think about food? Eat anything that you want, but in the right way and the right portion? Give this three months and see how it affects your family. The benefits are—and this has nothing to do with weight or 'will my cholesterol go down'—it will bring your family together and make you think about food in a positive way. I really believe in this program."

If you're interested in customized meal plans for you and your family, visit Cooking Light Diet today and subscribe!