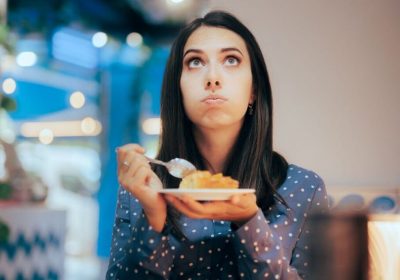 A weight loss journey without cravings would be an easy one but unfortunately, they can creep up on people at the worst of times which can make the process unbearable. But Dr Michael Mosley revealed he has found a solution that can help people curb those appetite surges.

By increasing a person’s daily intake of protein earlier in the day, research suggests it’s “key” to staying fuller for longer.

Dr Mosley explained: “Protein can help you stay full up and studies show it reduces your hunger hormone.

“It also boosts the level of a hormone known as peptide, which makes you feel full.

“It is well known that moderately increasing the amount of protein in your diet can help you feel more satisfied after meals.”

Higher levels of protein in a diet can also boost metabolism and contribute towards positive weight-regulating health hormones.

But what is less well known is what time of the day people should be consuming high-protein meals in order to sustain their weight loss.

Dr Mosley referenced a 2014 US-based study that divided volunteers into three groups to test whether protein at the first meal of the day could help people to feel fuller for longer, therefore curbing their cravings.

“Later on that morning, the volunteers were asked to rate the intensity of their pre-lunch food cravings.

“The results were clear, of all groups, the high-protein breakfast group recorded the highest dopamine levels and lowest pre-lunch food cravings.”

High-protein breakfasts can include the likes of Greek yoghurt, porridge, eggs and lean proteins such as fish and chicken.

Dr Mosley added: “I sometimes have porridge with wheat bran for breakfast, which comes to about 22g of carbs, and 5g of fibre.”

He explained that a protein-rich breakfast is “particularly effective” if paired with quality fibre, such as small amounts of fruit.

“Eating protein at the first meal of the day helps you feel fuller for longer because after a protein meal, levels of a chemical called tyrosine rise inside the brain,” he said.

“By increasing its own dopamine supply as the next meal approaches, the brain experiences a much weaker dopamine hit from high calorie food.”

And consuming a high-protein breakfast kick-starts a person’s metabolism, which helps to burn calories throughout the day.

It is often referred to as “the most important meal of the day”, with experts warning that skipping the morning meal can “throw off your body’s rhythm of fasting and eating”.

According to WebMD, when people wake up their blood sugar and by eating a good, healthy breakfast, it can help replenish it.