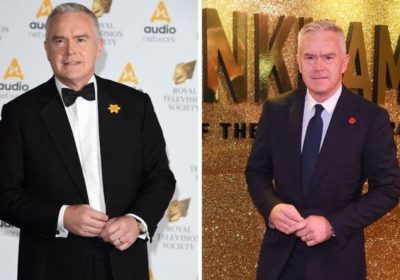 From his heaviest in 2016/2017, Huw has managed to lose a huge three stone. He previously weighed 16 and a half stone, having put on a lot of weight after his father passed away from cancer in 2010. It caused Huw to plummet into a depression.

He began to have an unhealthy relationship with food.

He added: “It’s like a drug. I’d eat when I wasn’t hungry. I wasn’t doing any fitness. I was grazing, watching telly and eating stuff, even though I didn’t need it.”

Food became a source of comfort for him during a time he felt “helpless”.

With his career being so prominent and all-consuming, Huw found that he did not have ample time to grieve his father’s death.

Huw sprung into action when both his mother and his wife warned him his weight was unhealthy.

Boxing and running helped him lose an impressive three stone.

With the help of former professional boxer Clinton McKenzie, he transformed both his physical and mental health.

Clinton’s advice was: “Eat sensibly. If you want a pint or a glass of wine, that’s fine. Just don’t overdo it and don’t eat – in his words – ‘sugary s***’,” he told the Daily Mail.

Health line believes that banning certain foods all together is a recipe for disaster.

“Instead of going on a diet, aim to become a healthier, happier and fitter person. Focus on nourishing your body instead of depriving it.”

The presenter fell in love with boxing and told the Daily Mirror that he tries to do it two or three times per week, as well as cutting out sugar.

He added: “I do TRX too, but only once a week in the park otherwise people will think I am going completely mad.”

TRX is a specialised form of suspension training which uses equipment developed by Randy Hetrick, a former Navy Seal.

The Welsh journalist, newsreader and presenter, is probably best known for presenting BBC News at Ten.

Among some of the key events he has worked on during his career are several royal weddings.

He was a presenter covering the royal weddings of Prince William and Kate Middleton and Prince Harry and Meghan Markle, as well as the Queen’s Diamond Jubilee.

After celebrating his 60th birthday this year, he has contemplated on his career.

In an interview with Radio Cymru he said: “Now that a big milestone is here, which is 60 years old, it’s natural for a man to think, ‘Am I going to continue in this job for another five years, or do I want to do something different?”