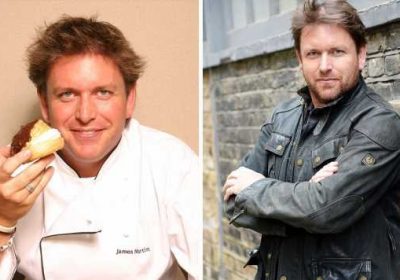 Celebrity chef James Martin transformed himself during Strictly Come Dancing – unsurprisingly, with eight hour days of dance practice, five days a week. Here is how he managed to keep it off with a healthy diet plan.

The Strictly Come Dancing lifestyle was, while impressive, unsustainable.

So when James Martin hung up his dancing shoes in favour of his apron, he needed a way to maintain his mammoth weight loss.

He admitted that when he was larger, at 17 stone, he felt self-conscious about how he looked.

The outfits on Strictly really compounded this insecurity as they were very tight.

Despite being a renowned chef, after a busy day of cooking for others the last thing James wanted to do was whip himself up a nutritious meal.

In order to maintain his impressive weight loss post-Strictly the chef had a good look at his diet and made some changes.

“I no longer stuff my face with really bad things such as takeaway pizza, Mars bars and fizzy soft drinks, which I used to have tons of during my working day, just like almost every other chef in the country,” he told The Herald.

Rather, he swapped this out for a high-protein, high-veg diet.

He cited eating fish twice a day as one of his new lifestyle changes.

Salmon, mackerel, tuna and sardines are all oily fish high in Omega-3.

As well as having weight loss benefits, it can lower risk of heart disease.

And rather than reaching for processed foods when he wants a snack, James now goes for fresh fruit.

In his campaign for the nation to eat more oily fish, he revealed an alarming statistic – 70 percent of people in the country don’t eat any fish.

The figure was even high in Scotland, according to the chef.

He called the situation “absolutely crazy”.

Undoubtedly, due to his job, James has access to a wide range of delicious and nutritious ingredients.

But he assured slimmers than healthy food is accessible to more people than ever before.

He added that healthy eating doesn’t have to be complicated.

“What could be simpler than pan-frying a little bit of salmon and serving it with some great new potatoes and seasonal veg?”

He advised cooking up a storm – even if it’s a super simple dish – as opposed to reaching for the takeaway menu or overly processed meals.

Another lifestyle change the chef made to keep off the weight was skipping the fizzy drinks and prioritising water instead.

As well as keeping the body fuller for longer, it is also obviously a no-calorie refreshment.