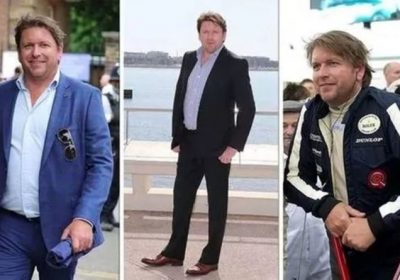 James Martin shares his Mayonnaise allergy with This Morning

James Martin will appear on his weekly Saturday show on ITV at 9:30am today. The chef’s fans will be reminded of James’ recent weight loss journey, which began when he changed his diet and increased his exercise uptake.

James Martin is currently in good shape as he has maintained a healthy weight and a slim frame since starting his weight loss journey a few weeks ago.

The chef seems to continue to follow a healthy diet and goes for regular walks to stay active and slim.

He often posts pictures of the countryside and his dog on social media, usually after taking the dog for a walk in the fields around his home.

However, how did the TV personality lose weight in the first place?

James began to lose weight without realising when he participated on Strictly Come Dancing in 2005.

At the time, the chef revealed he had lost a stone in just a week.

This was due to the show’s rigorous training programme, which many of the celebrities are unaccustomed to.

When he left Strictly after two months, James had reportedly lost a huge five stone.

James has previously spoken about how difficult it is for a “big bloke” like him to lose weight.

He told Mail Online: “I’ve really got to watch what I eat and drink, and make sure I exercise regularly.”

James reportedly cut back on fats to lose weight – including butter.

However, now, the chef has spoken extensively about his love for the ingredient and how he continues to cook with it.

The TV star has even written a brand-new book about the yellow condiment, entitled Butter: Comforting, Delicious, Versatile – Over 130 Recipes Celebrating Butter.

Although some people might think butter is fatty and shouldn’t be consumed if on a diet, James disagreed.

He told The Herald in an interview last November: “It’s not the butter consumption.

“It’s the ready-made food, it’s the packet food, the hidden salt, hidden fat – that’s the problem in this country.

“It’s not the butter in a butter block, or butter you put on your toast.

“It’s the fact that not as many people cook in the UK as they do in France or Italy or Spain.”

James, therefore, cooks with fat as part of a healthy and balanced diet.

In 2018, James shed a few pounds again after noticing he had put on a little of the weight he had previously lost.

He started to notice his appearance change when he watched himself on TV.

But he also received cruel comments about his weight online.

He told the Sun at the time: “I looked on social media and every comment was about me being fat.