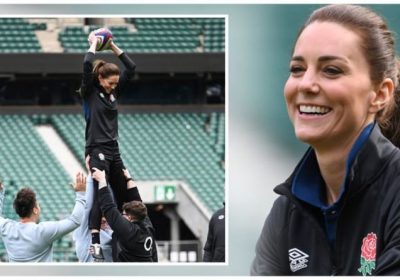 Duchess of Cambridge shows off rugby skills at Twickenham

Kate Middleton caused searches for ‘How to learn rugby’ by 930 percent worldwide on Wednesday February 2, 2022. This coincided with the Duchess of Cambridge becoming the new Patron of English Rugby. The position was formerly held by Prince Harry before he moved to America with his wife, Meghan Markle.

On Wednesday, Kate went to Twickenham looking sporty in a tracksuit emblazoned with the England rugby badge and trainers, with her hair tied back in a ponytail.

She then swapped into rugby boots and joined England players and officials for a training session ahead of their first Six Nations match on Saturday.

Kate could be seen running with the ball before throwing her hands in the air and cheering as she scored a try.

The players even lifted her up as she went to grab the ball in a lineout and she also took part in a scrum.

Kate Middleton has always been a sporty and athletic member of the Royal Family.

As well as participating in sports when she was in school, she always throws herself into sporting events as a royal.

By doing so, the Duchess is promoting athleticism and living a healthy and active lifestyle.

Analysis of Google search data reveals that searches for ‘How to learn rugby’ skyrocketed 930 percent on February 2, the same day it was announced Kate became patron of English Rugby.

A new finding by Digital ID reveals that searches for ‘How to learn rugby’ exploded to 10 times the average volume in one day.

This was an unprecedented jump in people Googling how to learn rugby, according to the analysis of Google search data.

A spokesperson for Digital ID commented on the findings exclusively for Express.co.uk.

They said: “The UK boasts some incredible rugby talent, but clearly no one can match Kate Middleton when it comes to influence.

“She simply sets the world on fire with everything she does.

“The Duchess of Cambridge’s appointment as patron of English Rugby is the perfect match for her, given her longstanding athleticism and interest in sport.

“Who can forget the powerful image of her rowing with toned perfection as part of the Sisterhood rowing team after she and Prince William split in 2007?

“The huge rise in searches for ‘How to learn rugby’ show just how much power the Duchess has in sparking passion for anything she shows interest in.

“We are likely to see many more people take to rugby.

“Images of Kate Middleton wearing the traditional England rugby tracksuit and being carried by members of the England Rugby Team as part of a training event to mark her patronage have already sparked a fashion frenzy.

“Searches for ‘rugby tracksuit’ soared over 6,000 percent just one hour after the pictures were released.”