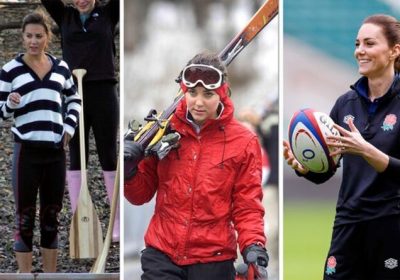 Kate Middleton praised for her 'calm under fire' by Andrews

The Duchess of Cambridge’s appearance hasn’t changed much since her university days, where she was first thrown into the spotlight due to her relationship with Prince William. Even after giving birth to three children, Kate weighs around 8st 7lb and is a tiny size six, according to a royal source.

At university at St. Andrews, Kate took part in many sports, including hockey, tennis, and rowing.

Since then, she has managed to maintain a slim and toned figure.

This is thanks to a combination of regular exercise and a healthy, balanced diet.

According to a source who spoke to MailOnline last year, Kate still enjoys keeping fit and is “an exercise junkie”.

“The Duchess is reportedly also a fan of CrossFit and yoga, makes time to go for a run most days, enjoys cycling, and does all her workouts without a personal trainer.”

Kate uses Kensington Palace’s gym to keep fit, but is reportedly a fan of one work out which involves no equipment at all.

According to the MailOnline insider, Kate regularly does the plank, which anyone can do from the comfort of their own home.

The source said: “It tightens her muscles. There are three elements, the basic plank, side plank and the prone skydive.

“All of which are positions Kate can hold for 45 seconds or longer and repeat at least 10 times each.”

Although Kate has not confirmed her diet regime in public, she reportedly has followed the Dukan diet to thanks for her fantastic figure.

The diet involves cutting almost all carbohydrates from one’s daily routine and replacing them with protein, plenty of vegetables, and healthy fats.

There are various phases to the diet which, when followed, leads to “rapid” weight loss, according to Healthline.

The first phase takes place in the first week and consists of eating unlimited lean protein, as well as 1.5 tablespoons of oat bran per day.

The next phase, which takes place in the first year, is alternating lean protein one day with lean protein and non-starchy vegetables the next, plus two tablespoons of oat bran every day.

The third phase, which should be followed every five days for every pound lost in phases one and two, consists of eating unlimited lean protein and vegetables, some carbohydrates and fats, one day of lean protein weekly, and 2.5 tablespoons of oat bran daily.

The last phase, which is indefinite, according to Healthline, involves following the third phase’s guidelines but loosening the rules as long as a slimmer’s weight remains stable.

According to MailOnline, Kate usually has a smoothie made of kale, spirulina, matcha, spinach, romaine, coriander leaves, and blueberries for breakfast, which is full of healthy nutrients and antioxidants.

For lunch, she reportedly eats raw and cold foods such as gazpacho, watermelon salads, tabouleh, and ceviche.

The Duchess does treat herself to richer foods though too, such as meat.

“That’s their idea of the perfect night.”