Home » Health & Diet » Man who lost 8.6 stone and over half his body fat reveals weight loss diet plan he follows

Man who lost 8.6 stone and over half his body fat reveals weight loss diet plan he follows 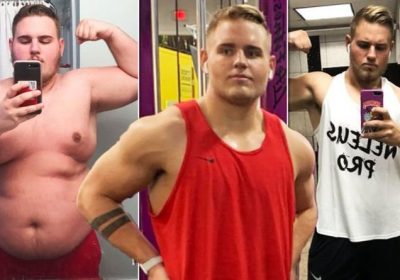 He lost an incredible 8.6 stone, quite the feat for any dieter.

Posing in a red vest top, the gym fan showed off his large shoulders and biceps, and toned arms.

He revealed to followers of the ‘Progresspics’ how he did it.

Weight loss diet plan: Man who lost 8.6 stone and over half his body fat reveals how

The sensible dieter told fans how he spoke to his doctor before making big changes to his lifestyle.

Even more impressively he has lost over half of his body fat. Originally he had 56 per cent body fat, now boasting a very slender 22 per cent.

Discussing his method for weight loss in detail he told interested Reddit users: “So I started off by just eating healthier around January 2018.

“Cut out alcohol and focused on eating lean foods and veggies. I didn’t see much progress because I wasn’t strict or counting calories.”

He revealed her eats a ketogenic weight loss plan following a method devised by a company Ideal Protein.

“It doesn’t seem like much, but once you get used to it, you realise how insane anything more than 3000 calories seems.”

The dieter make sure to consult medics about his big diet overhaul.

“I was on a weight loss protocol by my doctor so he monitored me every week to make sure I stayed healthy and got the nutrients I needed. It was very hard to eat such little amounts, but it paid off,” he said.

“If you’re trying to lose weight, you need to cut that down to like 2,000 calories.

How to lose weight – 10 weight loss tips from hot baths to eating with a man.

“My BMR is 2,400 calories so that’s how many calories I burn in a day without working out. It’s all a science. Eat less calories than you burn.”

So what did he eat? For breakfast he said: “I do Greek yogurt with granola and fresh fruit (typically strawberries or grapes) (maybe add a little honey if you like it sweeter).”

While dinner is: “Big protein, lower carbs, and a big salad (for volume).”