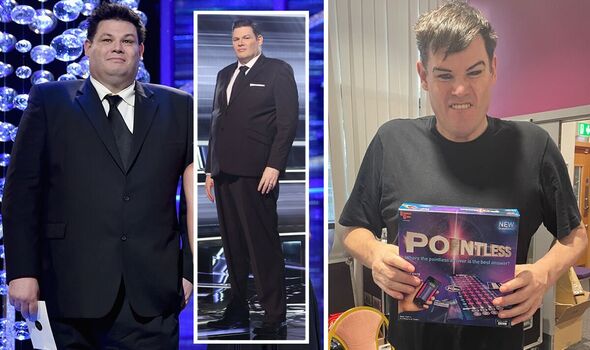 Mark Labbett has lost an incredible amount of weight over the past few years by following a healthy diet and exercising regularly. In a recent image, The Chase quizzer showcased his slimmer figure and fans didn’t recognise him.

Mark, aka The Beast, posted an image on his official Twitter account. He captioned the image with: “This was my secret Santa at the Northwich Panto. I suspect ⁦@richardosman.”

In the image, Mark was seen pulling a grimacing face whilst holding the Pointless board game.

Mark’s tweet was viewed over 587k times and several hundred commented on his weight loss results.

There were many comments, with fans expressing concern for how slim Mark now was. But Sal wondered: “You look great now Mark! How have you managed to lose your weight? I’ve been trying for ages with no joy!”

As for how Mark has gone about losing weight, he previously credited his dog, Baloo, for helping him fall into a regular exercise routine.

Mark explained: “My wife promised me that when we first got him she would take care of everything – feeding him, walking him, and so on.

“That lasted about two weeks before she decided ‘Actually Mark, look at your belly – you need the exercise!’”

In March 2021, Mark also revealed the foods he swapped to overhaul his unhealthy diet. He told Loose Women: “I’m on a high protein diet… so eating an awful lot of meat and lean meat, and as much as I love chips and other carbs, I’m having quite a bit less than I used to.

“And it’s sort of became a virtuous cycle, I’m not feeling that hungry, so you eat less, so you lose weight, so you’re not as hungry.”

The quizzer also said his son, Lawrence, has helped him to stay active, particularly during the Covid pandemic and lockdowns.

“The principal thing has been running around after a hyperactive three-year-old in lockdown when the nursery was shut,” he said.

“I found at the end of the evening instead of going to the fridge for late-night snacking, all I could do was collapse on the bed.”

At the start of the year, Mark shared a change in his clothes size due to his weight loss efforts.