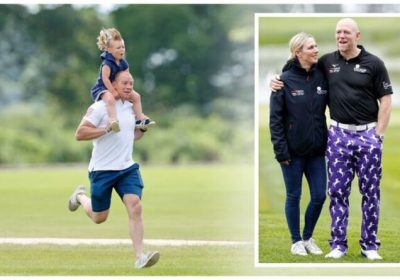 Mike Tindall, 43, married Zara Tindall, 40, back in 2011 in Canongate Kirk after dating since 2003. In 2014, they welcomed their first child Mia Grace Tindall, followed by Lena Elizabeth Tindall in 2018 and Lucas Philip Tindall in 2021. But how does the dad of three stay in such great shape?

Mike previously revealed he carries his daughter Lena, three, to help him train.

The royal dad was keen to not let his fitness slide during lockdown in 2020 and got the whole family involved.

He has previously been spotted carrying his daughter Mia, eight, in his arms but his younger daughter Lena has been adding an extra load when it comes to resistance training.

Mike revealed he uses his daughter Lena like a backpack to help him burn the calories.

He explained: “I did a lot of riding with Lena on my back, which helps with the resistance part.

“Mia and I also did lots of cycling together, and Zara trained with me, so it has been a bit of a family training programme.”

Mike also helped to raise £250,000 for The Cure Parkinson’s Trust by cycling 137 kilometres through the Gloucestershire countryside close to his home.

But taking part in the ride needed him to train, and it is something which he got both daughters’ Lena and Mia involved in.

The former England rugby star and his wife Zara live at their home of Gatcombe Park in Gloucestershire.

In the past, Mike has given his Instagram fans a glimpse inside some of the tasty dishes that the family enjoy.

They enjoy tasty burgers just as much as Britons across the country.

The former rugby player used a meal-making kit from London restaurant Mac & Wild to whip up professional-looking cheeseburgers, served on a rustic wooden board.

He wrote on Instagram: “Trying the @macandwild build yours at home and pretty happy with how they look!

“Get in my belly!” he captioned the picture of four burgers, one for each member of the family at the time before Lucas was born.

He told The Guardian back in 2007: “If Zara is away competing I’ll have my only takeaway of the week.

“It would definitely be a Chinese – it might be a banquet for two but obviously that would just be for me.

“I can do that fairly easily.”