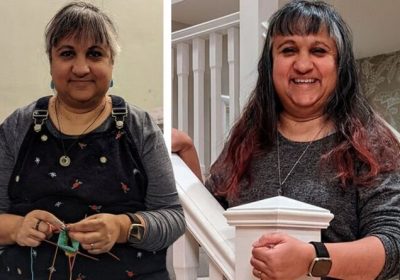 Type 2 diabetes can be a 'devastating diagnosis' says expert

Last year, Toddy, who suffers with type 2 diabetes, found out she is now on track to no longer be living with pre-diabetes, after implementing new, healthier habits in her diet and fitness regime. The single mum-of-three managed to reduce her weight by 4.6kg, or around 10lb, dropping a total of 23.5cm by changing her lifestyle.

She now says there’s “no going back” and that she’s loving her new found energy, flexibility and strength.

Toddy developed gestational diabetes during her third pregnancy, which put her at an increased risk of developing type 2.

After working from home and balancing home-schooling over the past year and a half, she found it harder to find the time for herself to exercise, cook healthy meals and keep on top of her general wellbeing.

She was diagnosed with type 2 in May 2021, but in the months after her diagnosis, she joined forces with Diabetes UK and Fitbit to help her better manage her health.

In turn, she was able to track her health habits and soon became more aware of her activity levels, nutrition, sleep, and stress.

During the 16-week programme, she was also supported by the Indian Body Coach Juggy Sidhu, and his multidisciplinary healthcare team.

Toddy found the support from each party helpful in taking steps to implement new long-term habits to help manage her condition.

From results recorded by her Fitbit, she managed to increase her daily steps from an average of 5,000 per day to 9,000.

She also averaged three 15-minute workouts per week, something she hadn’t been able to find the time to do before.

Her resting heart rate also decreased by 10 beats per minute.

After making huge progress, she noted that half-way through the programme she was already noticing positive changes.

Toddy felt fitter, felt more able to keep up with her kids, and found it easier to do everyday tasks.

She is part of the south Asian community – who are known to be up to six times more likely to have type 2 diabetes than the general population, according to Diabetes.co.uk – and has a family history of the condition.

Type 2 diabetes is a common condition that causes the level of sugar in the blood to become too high.

It’s caused by problems with the body’s insulin levels, and is often linked to being overweight or inactive, or having a family history of type 2 diabetes.

Type 2 diabetes can cause symptoms like excessive thirst, needing to pee a lot and tiredness.

According to the NHS, it can also increase your risk of getting serious problems with your eyes, heart and nerves.

It’s a lifelong condition that can affect your everyday life.

But studies have shown improvements if a person suffering with type 2 diabetes changes their diet and loses weight.

As stated on Diabetes.co.uk, the strongest evidence suggests it is mainly put into remission by weight loss.

But they note remission “is more likely” if you lose weight as soon as possible after your diabetes diagnosis.