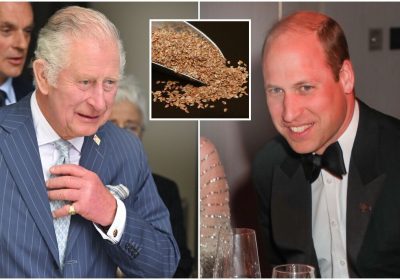 As the future King, Prince Charles would be expected to follow a very respectable diet. Britons would probably expect Prince Charles to eat gourmet meals served for breakfast, lunch, and dinner. But as it turns out, the Prince of Wales seems to have a preference when it comes to breakfast.

In fact, Charles’ choice of morning snack is so odd that even his sons tease him for it.

A young Prince William once warned guests at a breakfast buffet to stay well away from his dad’s “bird food”.

This has all been revealed in the new book ‘The Palace Papers’ written by journalist and Princess Diana biographer Tina Brown.

According to the book in a passage describing Prince Charles’ relationship with sons William and Harry, Brown describes how the Prince would take the boys to Stratford-upon-Avon to see plays by the Royal Shakespeare Company.

On one trip to see The Tempest, they were accompanied by actor and national treasure Stephen Fry, who recalled a particularly striking memory from breakfast that day.

Brown writes: “At breakfast at Highgrove, Fry was inspecting a buffet when he lifted a tureen that offered Charles’ preferred heap of Linseed.

“Prince William said ‘Oh no, don’t go near the bird table, Stephen, that’s only for Pa’.”

This hilarious exchange not only revealed Charles’ love for the ancient and fibrous seeds popular among health fanatics but also gives a window into the playful relationship Charles and his sons shared.

Brown added that Fry “was enchanted by how the boys teased their father, which he thought was a ‘truly healthy sign’.”

In recent years as vegan and healthier lifestyles have become more popular, foods like linseed have grown in popularity.

Prince Charles previously revealed he does not eat meat or fish for two days of the week and cuts dairy on one day of the week.

The Prince of Wales appeared on the Big Interviews on BBC in October 2021 to discuss the environment and what people can do to lower their carbon footprint.

He said: “The business of what we eat of course is important.

“For years I haven’t eaten meat and fish on two days a week and I don’t eat dairy products on one day a week.

“Now I mean that’s one way to do it – if more did that you would reduce a lot of the pressure on the environment and everything else.

“Because you see the thing about meat is very important – where does it come from, how is it grown?

“So if it’s grass-based and from the right breeds, you know if it is better quality but eaten less often – that approach to farming is less damaging than the industrialised approach with intensive everything, and causing huge pressures and damage.”

A Clarence House source said: “It can be a problem sometimes.

“When we do day visits or foreign tours, he can go the whole day without stopping for a break, which means we all have to miss our lunch as well.”

The source added: “It’s good in a way because it means he has time to meet more people, but he doesn’t seem to notice all the rumbling stomachs around him.

“You just learn that you have to have a big breakfast on those days,” the source told the Daily Mail.