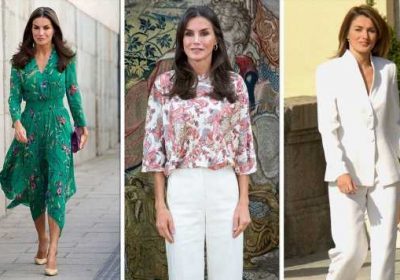 Queen Letizia, 49, is the wife of King Felipe VI of Spain and has two daughters, Leonor and Sofía. The mother-of-two lost her post-pregnancy fat quickly after giving birth to her children, and has managed to maintain her ideal weight since. Her appearance has not changed much since she was first in the spotlight, presenting on Spanish TV as a journalist in the late 1990s and early 2000s.

Queen Letizia joined the Spanish Royal Family in 2004, leaving her job as a journalist.

When she married Felipe, she was criticised by royal fans for her appearance: particularly how thin she was.

However, Letizia has always been honest about her naturally thin frame, stressing that it is her “body type” – it can’t be helped.

There is a difference between being slim and being healthy, and Letizia falls into both groups, ensuring that she eats a balanced diet and even avoiding certain unhealthy foods and drinks.

A royal source explained: “She doesn’t really drink alcohol to be honest, which is sometimes a problem for the toasts.

“King Felipe VI, however, is a wine connoisseur and has a private wine cellar in the Palace.”

Health experts have long debated if wine is healthy or not. According to Healthline, avoiding alcohol can be an effective way to lose weight as alcoholic beverages are generally high in calories and contain no nutrients.

However, nutritionist expert and founder of The Fast 800 diet, Dr Michael Mosley, has previously shared how the occasional glass of wine can be beneficial for one’s health.

Speaking about the Mediterranean diet, Dr Mosley said: “Eating fruits and vegetables, as well as full-fat yoghurt and the occasional glass of wine in the evening is also encouraged.”

Queen Letizia follows the Mediterranean diet, as well as the Perricone diet, according to reports.

During a visit to Torrejoncillos school in Cáceres, Spain, the 49-year-old explained that her favourite foods include vegetables, fruit, salads, and purées.

These reportedly add up to 80 percent of Letizia’s daily meals, alongside fish, eggs, kale, and spinach.

These foods make up a huge part of the Mediterranean diet, as well as olive oil, which is drizzled on most Mediterranean meals and ingredients.

Many celebrities, including Gwyneth Paltrow and Kate Moss, have reportedly followed the Perricone diet.

As for exercise, a royal insider claimed that Letizia’s “goal is always to reach perfection, or at least try”.

She continued: “If she exercises, she does it 100 percent. If she practices yoga, she wouldn’t stop until she knows as much as her instructor.

“She is like that with everything, with her body too. She watches what she eats to the extreme.”

Another close friend of the Spanish Queen added: “The Queen practices weight exercises every other day. She always recommends them when someone asks her. If the king is free, he would join her gym routine, too.”