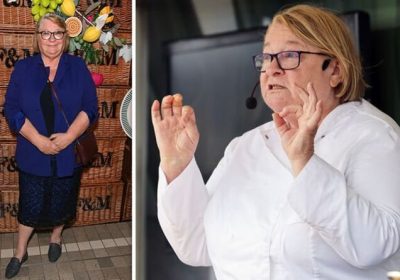 Rosemary Shrager, 71, is a British chef and TV presenter, best known for being an haute cuisine teacher. In recent years, she has turned her hand to providing cookery masterclasses via her Facebook page, and it was here where she also shared her weight loss journey and the results of following a keto diet.

Rosemary has been extremely open and honest about her struggle to lose weight.

She previously confessed: “I’m never going to be thin.”

And in previous years, Rosemary dropped three dress sizes and reduced her waist size by 14cm.

But slowly, the weight crept back on and she found herself worried about her size and health towards the end of last year.

In a video posted to her Facebook page in October 2021, Rosemary told her fans about the keto diet she had been following.

She began: “I’m doing my keto diet. Now, I have to tell you, I feel so much better.

“I have lost quite a lot of weight, you can’t really see it as I’ve still got a lot to lose.

“I’m feeling so much better about myself, I’m also feeling positive because as you all know, weight has been the bain of my life, and I’ve been fat forever.

“Honestly, this time, I really do believe I’m in it, it’s doable and I was beginning to feel so uncomfortable, clothes were feeling tight again.”

She went on to explain what it is like to be “fat” and said: “People like me, people do judge people if they’re fat, it is so difficult, it’s not an easy thing to do, it’s hard and you’ve got to learn to be hungry, but if you’re eating protein you’re not hungry.

As for why Rosemary wanted to lose weight, she said: “I want to look after myself, I want to stay alive, I’ve got Type 2 diabetes, and it was about time I really put my time to it – my grandchildren want me around.

“I felt I deserved it, not just for them, but for myself.

“I don’t want to lose a lot [of weight] – masses and masses – it’s about me feeling better and good about myself,” the chef added.

“I’m never going to be thin, I don’t want to be thin – it’s not me. Also you wouldn’t recognise me! But I can feel better and that’s the key.”

“I was frightened about walking down the road because I was worried I couldn’t walk back, I would have to get a taxi to pick me up and bring me back – that’s how bad it got.

“You have to pull yourself together, have to do it. Now I’m in the zone.”

Rosemary then updated fans a month later with her progress.

In another video, she said: “I’m still on it [the keto diet], I’ve lost a lot of weight, I’ve gone down a whole [dress] size.

“The thing is, I haven’t weighed myself, because I thought there was no point – it’s all to do with my dress size and how I feel about myself.

“It’s been six weeks, I feel a different person – I feel normal again, I feel I’ve got more energy.”

This is the first time Rosemary has publicly admitted to following a keto diet to try and lose weight.

Rosemary explained how she has a 16-hour fasting period, and only ate between 12pm and 8pm.

She admitted: “I don’t have anything to eat until midday and I don’t eat anything again after 8pm so I’m fasting 16 hours a day.

“It’s so easy and my energy levels are totally different.

Rosemary also explained how she changed the amount of caffeine she consumed: “I’m a bit of a grazer and spend all day tasting things, as you do as a chef, but I only do coffee before midday.”

As for what she would eat when she wanted a sweet treat, Rosemary opted for prunes.

“I love prunes – this is not a wind-up!” The chef remarked. “I seriously love them, and I have always loved them, and I eat them like sweets.”

When she was slimmer, Rosemary said she felt “a lot better”, she also noticed “clearer” skin and her arthritis “eased”.