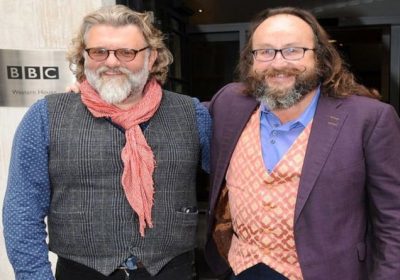 At his largest, Si reached 19.5 stone, while Dave was 18 stone; the pair knew they needed to focus on weight loss and a healthy diet to get their health back on track. The pair were both diagnosed with a number of health problems. While Dave has borderline Type 2 diabetes, Si had high blood pressure.

Si explained that at the time, a doctor friend showed concern and said to the pair: “Look lads, you’re middle aged now and morbidly obese. You need to do something about it.”

For Si, the turning point came in 2014 when he suffered a brain aneurysm.

He explained: “The doctors did a lumbar puncture and found blood in my spinal fluid,” he explained. “At that point they grew really worried – I had to sign a load of forms to say I understood I may make it, or I may not. It was scary for me, but I think it was even more difficult for my kids and wife Jane at my bedside.”

“At that point they grew really worried – I had to sign a load of forms to say I understood I may make it, or I may not. It was scary for me, but I think it was even more difficult for my kids and wife Jane at my bedside.”

The chef was rushed to hospital where he had an operation which stopped the bleeding.

Following his surgery, Si spent four days in therapy and was unable to do much for the next eight months and was told that he had lost “20 percent of himself”.

Si had already lost some weight at this point and claimed that if he hadn’t, he may not have survived.

Unfortunately, he regained the weight he had lost during his stint undergoing rehab but was determined to shed the weight again as soon as he was well enough.

Si explained: “About six months ago I decided it was time to start losing weight again.

Si, who is father to sons Alex, James and Dylan, teamed up with cooking pal Dave to once again shed the extra weight.

Since then, the pair have lost six stone between them and are feeling far healthier.

Si finds that getting on the scales helps to motivate him.

He explained: “We get on the scales and encourage other middle-aged blokes to do the same,” he explained.

Since losing weight, Si has now lost so much weight that he no longer needs to take medication.

He said: “I was told that I could stop taking the blood pressure medication I was on. It was a small dose but not having to take the daily tablet is great.”