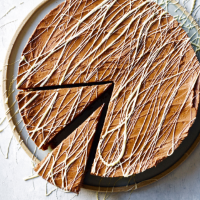 1. Preheat the oven to 200°C, gas mark 6. Beat together the soft cheese and sugar and set aside to come to room temperature. Grease and line the base and sides of a 20cm springform cake tin. Seal the biscuits in a food bag and bash with a rolling pin to crumbs, then stir into the melted butter. Press into the base of the tin and bake for 5-10 minutes, until crisp; set aside to cool.

2. Meanwhile, melt the dark chocolate in a heatproof bowl set over a pan of barely simmering water. Set aside until quite cool but still liquid. Whisk the cream to soft peaks, then fold in the cooled chocolate. Fold in the cheese mix, then spoon on top of the biscuit base and chill for at least 2 hours.

3. Carefully remove the cheesecake from the tin. Melt the white chocolate in a heatproof bowl set over a pan of barely simmering water. Drizzle over the top of the cheesecake and chill briefly to set.

This recipe first appeared in Waitrose Food, May 2017 issue. Download the Waitrose Food app for the full issue.