Home » Health & Diet » Weight loss: Man loses 11st by cutting down on one thing – ‘finally took my top off’

Weight loss: Man loses 11st by cutting down on one thing – ‘finally took my top off’ 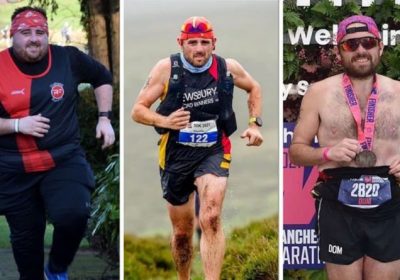 Weight loss is something many people struggle with, but without the motivation, only a few manage to achieve their goals. For Dominic, who struggled with his weight for a long time, it was both his son and rugby legend Rob Burrow who motivated him to slim. But how did he manage to lose 11 stone?

“I was very emotional in December 2020 and after seeing Rob Burrow give an interview following his diagnosis with MND and how he wanted to fight this awful disease so he could spend more time with his young family, it forced me to ask myself some hard questions about my lifestyle and choices.

“I was weighing in at over 22 stone and very unfit when Rob was diagnosed.

“I realised that I needed to change a lot of things about myself so that I could be here in the long term for my son,” he explained.

“I started eating healthier by joining weight watchers and on January 1 I started to run every day (a minimum of one mile) to kickstart my long road back to being a fit and healthy dad so that hopefully I could be as good a role model for my son as Rob has been for thousands of others.

“I followed the coach to five km to help build up my running slowly whilst continuing to run every day.

“By June 2021 I had lost just over 11 stone and I’m now at a weight that I’m happy with and just eating healthy and exercising to maintain both my physical and mental health,” he said.

But Dominic admitted what helped him the most was changing his diet habits and cutting down on one specific thing.

“The big thing that helped the weight loss was cutting my takeaways down from two or three a week to once a week.

“I always kept the one takeaway a week as it gave me something to look forward to and aim towards and it meant that I never felt like I was depriving myself of everything I enjoyed.

“As when I’ve done this in the past I’ve always ‘blown my diet’ by having a lot of food that I know I shouldn’t all at once because I’ve been too strict.

“The other thing was just not having as much processed food as I had before and trying to be more organised by planning my menu for the week so that I had real food to take to work rather than buying a ready meal.

“This usual meant cooking an extra portion of my evening meal to take to work the next day,” he said.

“Losing the weight has given me the energy to keep up with my five-year-old son and it’s given me the confidence to make changes in my life to make me a happier person such as changing careers from being a bus driver to working as a support worker in a college.

“It has also given me much more body confidence than I ever had before. I ran the Manchester marathon on October 10, 2021, and it was such a warm day and I was really struggling with overheating and I actually had the confidence to finally take my top off and run the final nine miles feeling much more comfortable.

“I would never have thought to do this before and even when I was exercising I would wear baggy clothing to hide my body as best as I could,” he admitted.

In January 2020 Dominic completed a five km park run in 48 minutes and in October 2021 he ran the Manchester Marathon in three hours 24 minutes 44 seconds.