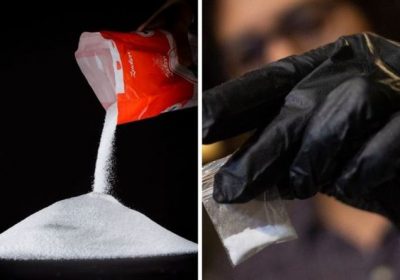 The NHS recommends that adults eat no more than 30g of added sugar per day. Doctor Amir Khan embarked on a “teeth-rotting” journey by eating 177g of added sugar.

This is the equivalent of a whopping 44 teaspoons or cubes of sugar.

Some experts believe that sugar is an addictive substance, having similar effects on those who consume it to users of Class A drugs.

“That makes sugar slightly more dangerous in a way.”

The average person would not hesitate to enjoy a large amount of sweets or chocolate, but would likely be more hesitant to dabble in drug taking.

Initially, Doctor Amir Khan was stunned by the extortionate amount of sugar he had to consume each day.

But even by the eighth day, he had gotten used to and almost enjoyed his breakfast cereal heaped with sugar.

He stated: “I’m getting used to eating a lot of sugar, so while before this would feel so alien on my palette, it just feels normal now.

“Because I’m forcing myself to eat so much sugar, I thought I’d be sick of the sight of it and the smell of it but that’s not the case.”

He even admitted: “I’m a bit worried about coming off it.”

Taking a bite of a profiterole, the doctor said: “I don’t like profiteroles at the best of times, but now I do.”

Not only did his month-long sugar binge affect his taste buds and cravings, it affected his mood dramatically.

“If I don’t eat sugar I get even more irritable now, so I feel like I need to eat it to be nice to people.

“It feels like I’m starting to eat sugar compulsively.”

His physical health also took a turn, as his slender 69kg frame rocketed to 71.5kg in just one month, leaving the doctor with 2.5kg to lose.

The effects of his sugar binge were many.

He explained: “My bowels are my main issue at the moment. I always need to know where the toilet is and I’ve never had to do that before.”

He also suffered with adult acne caused by the increased sugar intake.

The sweetness overload put Doctor Amir Khan “through the mangle both physically and mentally”.

Overall, obese people and those with Type 2 diabetes often have a reduced life expectancy of 10 years.

Sugar consumption needs to be taken as seriously as drug abuse, according to the experts.