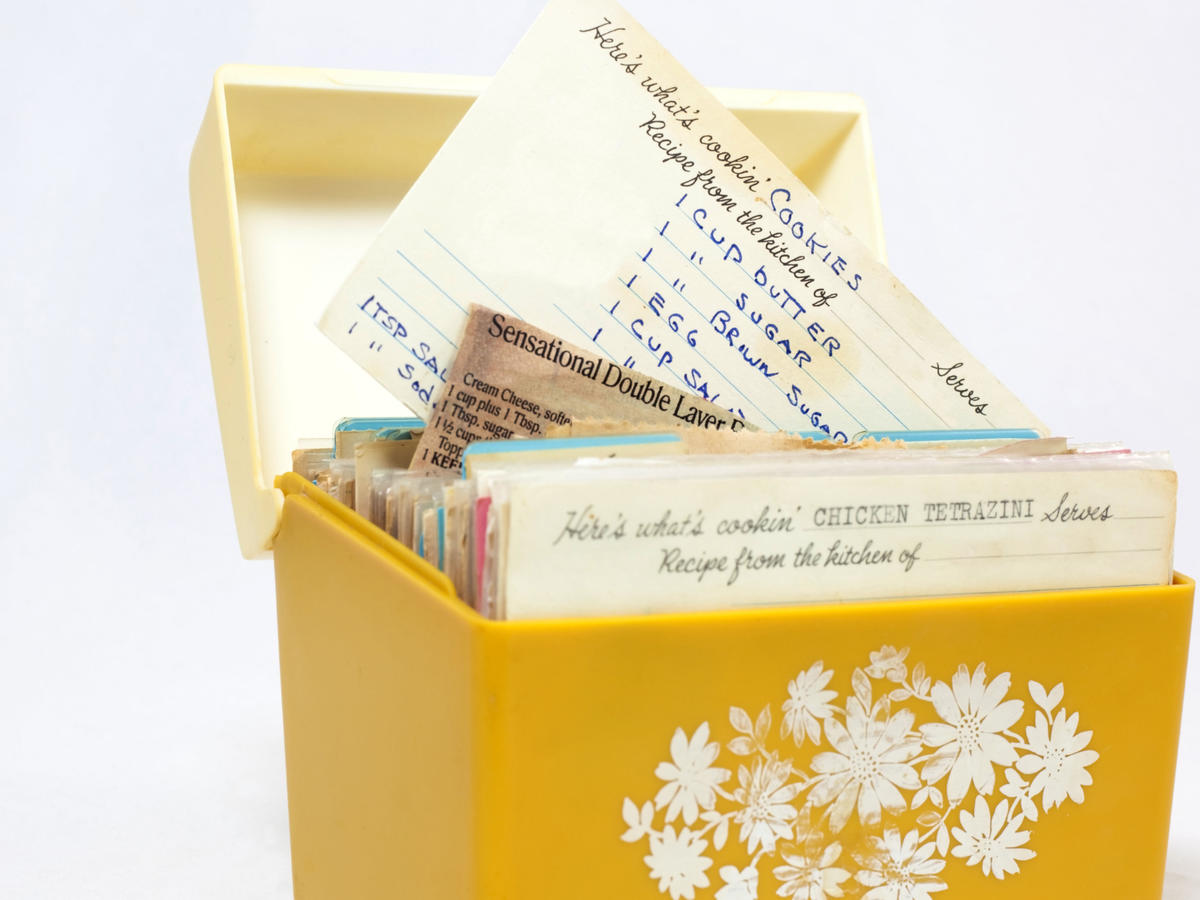 “It’s not under the Ps,” I shout over the din of a pulsating dishwasher as I thumb through a small metal box filled with alphabetical dividers and yellowed notecards.

“Try F, for fudge,” my grandmother shouts back.

It’s not there either. It’s also not in B (for butter, just in case), and it’s not in the treasured As, which is actually the spot for the most-cooked recipe.

I’m standing in my grandparents’ kitchen, looking for my grandfather’s peanut butter fudge recipe. My grandfather, a larger-than-life figure who was renowned for his fudge in doctors’ offices and hair salons across my small North Alabama hometown, had passed away three months earlier. He was the last one to use the fudge recipe card—no one else dare make it—so he’s the one who knew his secret filing strategy.

“Oh, for dessert. That makes sense,” my grandmother says.

It does not make sense, not in the least.

But here I stand, holding a recipe card with well-worn edges, their fray showing signs of use; the fading recipe, a testament to the number of times my Papaw had made this recipe. Some years ago, he marked out “Oleo” and wrote butter. The script number two beside teaspoons of vanilla was clearly once a one.

Now, the recipe card is mine, and it is as much a treasure as anything else I can ever receive. It holds memories of him, of holidays, of the times he tried to teach me how to make this beloved recipe. The recipe card is a gift.

In the age of digital recipes and limitless recipe “boxes,” families are losing the tangible mementos of the recipes and foods that fed them for most of their lives. Gone are the metal boxes in the cupboard above the microwave. In their stead are Pinterest boards for every cuisine, craving, and curiosity.

That makes the recipe cards families do manage to find and retain all the more valuable.

Indeed, EverPresent, a company that can “expertly digitize and organize your home movies and photos,” has seen the revenue from their recipe photo books grow from one percent to 20 to 30 percent in the last year, the Wall Street Journal reports.

EverPresent can scan those age-old cards, smudges and all, and preserve them in a printed keepsake book. They can print as many as you need, too, which means no family members need fight over cherished recipe cards.

Minted can turn recipe cards into foil-printed art, scanning every inch of written text and then printing it in a single framed piece. The cook’s name can be added to the keepsake.

As more families scramble to find ways to preserve these cards, they’re faced with some harsh realities, however.

Kitchens, it turns out, aren’t great for delicate pieces of paper. The heat, humidity, splashes, and splatters can do a number on paper. For the purposes of cooking dinner, it may not matter. If you want to turn the recipe cards into art, it does.

Framing recipe cards can also present challenges. The recipe cards, hand-written long ago, are certainly not on acid-free paper. The natural patina of food and smoke provides characteristic charm, but the foods on the cards are likely filled with acids that will continue to deteriorate the paper.

Plus, there’s the task of framing something that was inherently never meant to be framed.

“Often, clients come in with two sided items and ask for them to be mounted between two pieces of glass,” says Kathy Rose-Byington of Edgewood Frame Shop in Homewood, Alabama. “From a conservation standpoint, this is the worst possible solution. There is nowhere for atmospheric moisture to go but into your document. The mounting comes down to an adhesive, which is irreversible and will fail over time.”

Rose-Byington adds that they have been able to frame double-sided documents by first “scanning the back and printing it to match the front.”

WATCH: Tradition in the Kitchen: A Southern Living Story

How to Preserve Your Family’s Notecards

If you or your family still cooks from the notecards, you’ll have to decide whether they’re treasured enough to write a new one in order to save the heirloom. If the joy of cooking a family recipe comes from using the card your ancestors used before you, by all means, keep cooking.

Just remember that the heat and moisture of a kitchen, combined with the exposure to food and water, can greatly deteriorate recipe cards. Consider moving them out of the kitchen entirely if you want to keep them safer.

Newspaper cutouts will quickly grow fragile. They should be placed in file folders, separate from other pieces of paper. The acid in the newsprint will quickly deteriorate other papers.

For long-term preservation, consider high-resolution scanning. You will still have the tangible copy to hold for many years to come, but you will also have an artifact—albeit, digital—for many generations to come.