Home » How-To » Equipment » This Is, Hands-Down, The Best Single-Serve Yogurt I've Ever Eaten

This Is, Hands-Down, The Best Single-Serve Yogurt I've Ever Eaten 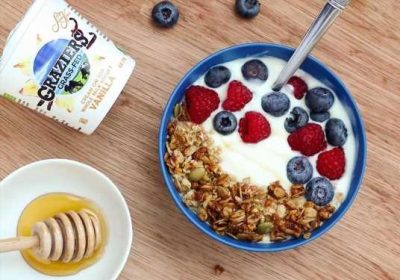 As someone who grew up with a routine breakfast of yogurt and cereal, there are few things that are less exciting in this world to me than single-serving yogurt cups. Yogurt, while delicious, is generally something I only seem to crave if I’ve made it myself, or if I’m lucky enough to have the cash for a gourmet brand in a bigger container. Between childhood burnout and the simple fact that most affordable yogurt cups are so-so at best, I’ve come in my adult years to treat the idea of single-serving yogurts with skepticism.

That’s changed since my household discovered Grazier’s cream on top yogurts. The specialty yogurt, made by Sierra Nevada Cheese Company, is made from organic whole milk obtained from grass-fed cows, which means it’s a little pricier than some yogurts you might find in your dairy aisle. Each (6-ounce) container cost about $1.30 when my household ordered them through Imperfect Foods. If you’re a sucker for quality, however, these delicious cups might be worth the cost.

If you’ve never had cream-on-top yogurt before, then you might be initially taken aback by the yellow-ish layer that greets you when you peel back the cup’s lid. That layer is simply milk fat that rose to the top and cooled while the yogurt was going through its pasteurization process. Thick and rich tasting, it definitely adds another layer of deliciousness to Grazier’s softly tart yogurt.

Grazier’s also offers several varieties of fruit-on-the-bottom yogurts in their cream-on-top line, so if you’re not a fan of plain yogurt, then you’re in luck. So far, the blueberry variety is my favorite, though the lemon and mixed berry options also look delicious. Lovers of Greek yogurt will also be pleased to know that while this yogurt isn’t the tartest on the market, it is notably thick.

Single-serving yogurt can definitely be an acquired taste, especially for those of us who have consumed too many substandard cups. But if you find yourself craving an easy-to-grab, quality dairy snack, Grazier’s is definitely worth seeking out and stocking up on.