20 Side Dishes to Rely on All Summer Long 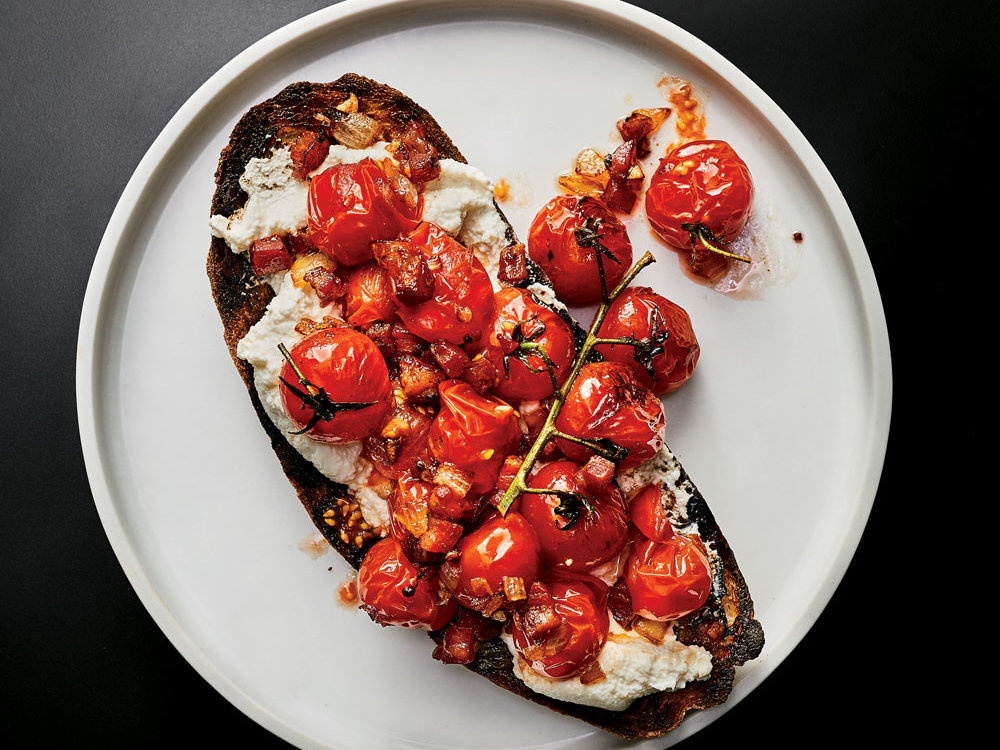 Best New Chef Michael Gallina of Vicia in St. Louis has a way with vegetables, and this time of year tomatoes are his muse. His Burst Cherry Tomatoes and Pancetta is a simple sauté that brings everything to the table: sweet acidity from the tomatoes; a salty, savory chew from the pancetta; and aromatics from the garlic and onion. The pancetta seasons the mixture, which begs to be served over ricotta toast.

This modern take on potato salad forgoes mayo for a base of vinegar and olive oil. Justin Chapple also grills the potatoes to add a great smoky flavor before tossing them with quickly pickled red onions. But the best part is the playful salt-and-vinegar potato chip topping, which adds an addictive crunch.

Get a skillet really, really hot before adding the snap peas; they make a fun popping sound when they hit the pan. Then put the skillet straight into a hot oven, tossing the peas every few minutes so they don’t burn.

This sweet, salty corn salad is the perfect picnic side. Bonus: You can make the aioli the night before and fold in right before serving.

This traditional Italian salad from chef Chris Behr of the Rome Sustainable Food Project is incredibly versatile. He adds roasted almonds here for crunch, but he also likes to fold in blanched fresh peas and halved pitted olives.

This simple summer salad from Portland, Oregon, chef Joshua McFadden perfectly showcases summer produce at its peak. When corn season is in full swing, cut the sweet, raw kernels off the cob and toss them into this dish.

Instead of dried flaked or shredded coconut, chef Biju Thomas uses meaty fresh coconut in this vegetable dish. You can find the fresh chunks in some well-stocked produce sections, or buy the frozen unsweetened variety at Trader Joe’s or a natural food store. Fried mustard seeds, coriander, and chiles light up the dish with color and texture.

“For those of you who have struggled with these in the past, I can offer you a few tips to make your life easier: Don’t oversteam or they will fall apart, never giving them a chance to hit that oil. Don’t understeam or you’ll never be able to crush them. Let them cool a bit before you smash them so they also dry out a bit, making them less likely to fall apart. The oil must be hot. Think of this as a shallow-fry: if the oil is not hot enough, it will soak into the potato rather than crisp it up.” Reprinted from Dining In: Highly Cookable Recipes. Copyright © 2017 by Alison Roman. Photographs by Michael Graydon and Nikole Herriott. Published by Clarkson Potter/Publishers, an imprint of Penguin Random House LLC.

Tomatoes with Herbs and Almond Vinaigrette

New York City chef Dan Kluger makes a deeply flavorful vinaigrette for summer’s sweetest and juiciest tomatoes. Instead of dry-roasting almonds for his salad, Kluger toasts them in olive oil until they’re crisp and golden, then uses the richly flavored oil to make a tangy dressing.

This sweet and crunchy salad with lots of immune-boosting vitamin C is delicious with grilled pork or in a pulled-pork sandwich. To wilt the fennel slightly, Michel Nischan briefly marinates it in vinegar and salt before tossing it with firm, ripe peaches.

If you have the time, make the caponata at least a day ahead; it’s one of those dishes that improves with time. Eat it as they do in Sicily: spooned over bread or focaccia, alongside roast lamb or chicken, paired with a wedge of pecorino…in short, with almost anything!

Requiring just 15 minutes of prep, these superthin sweet pickled cucumbers are salted before they’re submerged in the pickling brine for maximum flavor

In this alternative take on a classic coleslaw, tender haricots verts get tossed with crunchy strips of carrot, red pepper and parsnip.

Kay Chun takes pasta salad to a new level with sweet grilled corn, zucchini and a creamy lime dressing spiked with chile powder. She uses fresh cilantro to add brightness and then tops the whole salad with tangy slivers of fresh goat cheese.

This salad is an extraordinary combination of ingredients that wouldn’t seem to go together: feta, strawberries and almonds.

This warm, garlicky anchovy dressing here is fantastic with an assortment of juicy, peak-season tomatoes. To finish the dish, Amelia O’Reilly and Nico Monday top it with tangy pickled shallots and an oozy, soft-boiled egg.

Corn on the Cob with Seasoned Salts

“Walk to pick it, run to cook it,” was the mantra back in the days when corn turned starchy within hours of harvesting. New varieties stay sweet and tender longer. Flavoring the ears here is a trio of seasoned salts.

Paul Newman, the late co-owner of Dressing Room, Michel Nischan’s restaurant in Westport, Connecticut, loved a good chopped salad. To add a tangy burst of flavor, Nischan pickles the carrots, celery and peppers before tossing them with the rest of the salad.

When Suvir Saran’s mother tried this spicy, crunchy cabbage slaw at his restaurant Tapestry in New York City, she said, “Baba, this is the best chaat I’ve ever eaten!” While Saran didn’t intend to make over the traditional Indian snack, a dish with chickpeas, potatoes, yogurt and chutney, the crunch, spice and tang immediately elicit an iconic chaat. “There is nothing Indian about it, and yet, it’s entirely Indian,” says Saran.