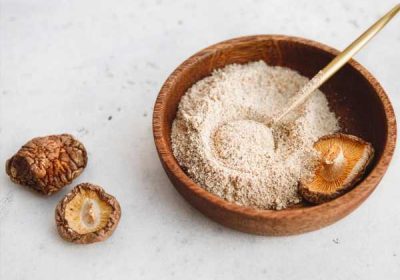 When I first moved to NYC decades ago, I discovered this strange little shop called Aphrodisia. You can just imagine what I thought they sold, considering that it was located in Greenwich Village. But, upon entering, I realized that it was a bulk spice shop, and I was in heaven. Herbs, spices, teas…the aroma alone was enough to make you swoon. One of the first things I bought was a little paper bag filled with something called “Porcini Powder.”

Well, I have to tell you that that was an honest to goodness life-changing moment for me. I had paused and smelled almost every bin in the shop, much to the amusement of the silent and ever watchful  woman who owned and ran it. But the one that stopped me in my tracks was this Porcini Powder—a medium tan powder with an aroma that stunned me. I knew what porcinis were (I subscribed to Gourmet after all!) but I’d never actually tasted one. And dried mushrooms, let alone powdered ones, were as alien a concept as I could imagine. But the smell was just intoxicating. So I bought a small amount, and hurried home to my third floor walk-up to experiment.

For about a week, no meal  was safe from a sprinkling of this magical dust. Scrambled eggs, a pasta sauce with plain old white button mushrooms, a creamy chicken soup, nothing I cooked avoided a pinch or two. And I was hooked because not only did nothing suffer—everything I added the powder to was enhanced. This powder didn’t change the texture at all, as adding mushrooms would. It just gave my food this deep, almost mysterious woodsy flavor.

RELATED: Dried Mushrooms Are Worth Every Penny—Here’s How to Use Them

I even made some mushroom soup. Whenever I’d made it in the past, it seemed a little, well, not quite mushroomy enough. That was no longer a problem with my magical powder. I think I almost single handedly kept Aphrodisia in business during the following months.

But the one thing constant in NYC is change. So, far too soon, Aphrodisia disappeared, another casualty of gentrification and rent hikes. But I had an idea. The porcini powder had been dry, obviously. So was there a way that I could make my own out of dried mushrooms? I bought some dried mushrooms…not porcini because this was an experiment, and if it failed, I didn’t want to lose very expensive porcinis. I placed the dried mushrooms in a new fangled gadget I had received for Christmas called a Cuisinart. A few noisy moments later I had a small pile of wild mushroom powder. Success!

Now, of course you can find mushroom powder in stores and online. But it’s really kind of fun to make your own. And you can vary the amounts and types of mushrooms you include to alter the flavor for specific dishes. Just don’t blame me when you start putting this in everything—because you will.