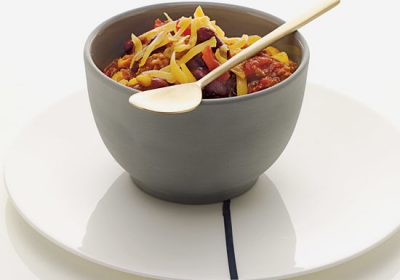 Jean-Georges Vongerichten is so fond of his wife Marja’s ultrarich mac and cheese that it appears on the menu at the Mercer Kitchen, one of his New York restaurants. Marja makes the dish with four cheeses, from creamy Monterey Jack to extra-sharp cheddar. The most unusual touch: the cubes of cream cheese that melt on top.

Big, creamy butter beans give a tuna and celery salad terrific heartiness. The salad would also be delicious spooned over slices of warm grilled country bread.

Accompany the rich frittata with a chardonnay from South Africa. Their wines tend to be French in style, with more acidity and less fruitiness than those from the United States.

Whole-wheat spaghetti is one of Melissa Rubel’s favorite pastas because it is a good source of fiber and has an appealing chewiness. Here, she updates sesame noodles, a Chinese take-out classic, by giving the peanut sauce a hit of fiery red curry paste.

In this takeoff on the campfire classic, Grace Parisi replaces crunchy graham crackers with buttery store-bought pound cake, sandwiched with marshmallow fluff and peanut butter and served alongside a cup of warm melted chocolate for dipping.