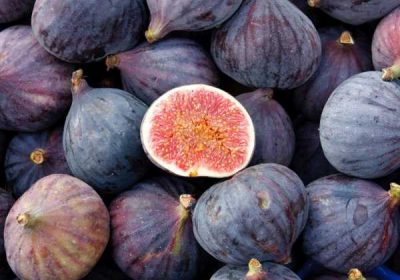 If you follow any California-based chefs or foodies on Instagram, you’ve probably seen some of them show off fresh figs recently. They certainly look delicious, and their versatility means they can play a crucial role alongside smoky meats or even in a dessert course.

While there’s no denying that figs look and taste great, it turns out that this “inverted flower” is only a viable food item because of one specific pest you probably want to keep far away from your late-summer picnic: wasps.

No, not the boat shoe-wearing kind. We’re talking about a real (small) variety of the stinging insect called the fig wasp, which exists in a mutually beneficial relationship with the fig tree. As explained by the US Forest Service, female fig wasps are attracted to a scent that figs emit, burrowing themselves inside (losing their wings in the process) to pollinate the flower, lay their eggs, and die.

WATCH: Can You Eat Peach Skin?

When a female fig wasp winds up in a male fig, she lays her eggs inside, pollinating the flower to provide her male and female offspring with something to eat. The males are flightless, existing only for reproduction and to dig a path for females to escape and continue this symbiotic lifecycle anew.

The reason figs are an edible fruit, however, is because these female wasps indiscriminately work their way into both male and female figs. Though there’s no way for wasps to reproduce in female figs, the flower still gets pollinated, leaving behind what us humans enjoy eating every summer.

“But wait, doesn’t that mean there’s a dead wasp inside every fig we eat?” Well, yes and no. The beauty of the fig and wasp relationship is that figs produce a special enzyme called ficain (or ficin), which breaks down the female wasp’s exoskeleton after it pollinates the female fig. By the time a fig makes its way to you, there’s little to no trace of a wasp that only measures 1.5 millimeters at full size anyway. If anything, you might be more likely to find bugs in other produce like strawberries or broccoli.

So let this be a reminder to you that fruits (and figs) require help from insects in order to get to your local produce section. The idea of encountering them ourselves may still feel a bit repulsive, but summer really wouldn’t be the same without them.

So next time you bite into a fig, think of the humble wasp who died to make it tasty for you. Though the enzymes mean it more than likely won’t physically be there, it sure is in spirit.