Home » How-To » What Is Bread Pudding—And What Kind of Bread Should You Use?

What Is Bread Pudding—And What Kind of Bread Should You Use? 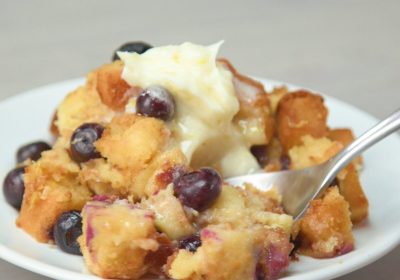 If you’ve never tasted bread pudding, you’re missing out on a truly decadent dessert. Here’s everything you need to know:

What Is Bread Pudding?

Bread pudding is a dessert made of stale bread and custard. While wet bread (stale bread, no less) may not sound appetizing to those who’ve never tried it, the indulgent treat is a time-tested classic for a reason: Bread pudding is simple to make, impressive to serve, and absolutely exquisite.

Traditionally, the egg-based custard contains raisins and nuts and is seasoned with spices like cinnamon and nutmeg. Savory bread pudding also exists, though, and may contain suet.

In the U.S., people tend to call anything resembling this dessert “bread pudding” (see this recipe for Peach Bread Pudding with Bourbon Caramel or these Spring Vegetable Bread Pudding Muffins).

Bread pudding’s history is a long one. It’s so old, in fact, that people aren’t quite sure of its origins.

We do know that by the 13th century people in England were calling it “poor man’s pudding” because the cooks who made it couldn’t afford to throw anything away (hence the use of stale bread in a dish).

Eliza Smith's The Compleat Housewife, published in 1728, was likely the first cookbook to feature a traditional bread pudding recipe: “Take a two penny loaf, and a pound of fresh butter; spread it in very thin slices, as to eat; cut them off as you spread them, and stone half a pound of raisins, and wash a pound of currants; then put puff-paste at the bottom of a dish, and lay a row of your bread and butter, and strew a handful of currants, a few raisins, and some little bits of butter, and so do till your dish is full; then boil three pints of cream and thicken it when cold with the yolks of ten eggs, a grated nutmeg, a little salt, near half a pound of sugar, and some orange flower-water; pour this in just as the pudding is going into the oven.”

Fact: British and American definitions of “pudding” are quite different. If you’re from the U.S., the word likely evokes nostalgic memories of plastic cups filled with a thick, creamy chocolate dessert.

People in the U.K., however, will think of a sweet or savory dish—often including meat or animal fat—that is steamed or boiled.

What Kind of Bread Do You Use For Bread Pudding?

The best type of bread for bread pudding is a loaf that would otherwise be thrown away. This dessert’s history is rooted in preventing food waste, after all.

However, some breads do work better for the job than others. For instance:

Can You Make Bread Pudding Without Stale Bread?

You can totally use fresh bread for bread pudding. You can make the bread slightly sturdier by toasting it a bit or by cutting it up and leaving it on the counter for a few hours.

How to Make Bread Pudding

A Classic Bread Pudding is made by simply pouring a spiced egg-custard over bread before baking (get the recipe here).

There are so many variations of bread pudding these days, though, so you shouldn’t limit yourself to just one recipe. Looking for ideas? Check out Our 26 Best Bread Pudding Recipes for inspiration.