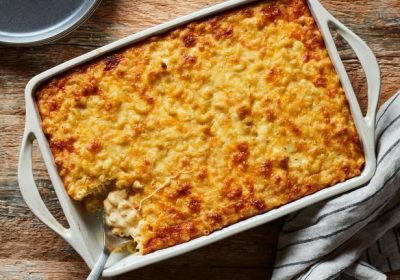 This recipe for Southern-style mac and cheese is baked rather than made on the stovetop, meaning you can easily slice portions to serve. The combination of cheddar, mozzarella and gouda cheeses is accented by mustard and Cajun seasonings for a nice kick.

Get the Recipe:Southern Baked Mac and Cheese

This original recipe from Kardea Brown is a refreshing salad starring black-eyed peas. Black-eyed peas originated in Africa and form a major part of Southern cuisine, especially for the Gullah people living in islands off the Atlantic coast.

Biscuits are a favorite Southern quick bread that takes little time to prepare since they don’t require yeast or proofing and get their rise from baking powder. These fluffy biscuits are great with any meal and can be the perfect vessels for sweet or savory fillings.

Pecan trees grow wild throughout much of the Southern United States, and the trees’ nuts feature in many local specialties. This iconic Southern pie makes use of these sweet nuts that form a crunchy crust over a layer of ooey-gooey filling.

Collard greens aren’t the only type of braised leafy green enjoyed in the South. While collards are certainly the most popular, mustard greens don’t fall far behind. These greens have a peppery flavor that combines beautifully with the smokey bacon in this recipe.

Get the Recipe:Southern Mustard Greens

Brunswick stew is a dish that isn’t very well known outside of the Southern United States, but this hearty stew deserves more attention. Trisha Yearwood’s recipe includes three types of meat and potatoes and corn in a tomato-based sauce with just a touch of cayenne pepper.

Get the Recipe:Jack’s Brunswick Stew

Fried green tomatoes are a unique Southern specialty made with unripe tomatoes. The firm texture of these tomatoes makes them ideal for frying, while the tangy flavor balances out the richness of the breading. With Kardea Brown’s spicy ranch dressing, this recipe is sure to be a regular favorite.

Get the Recipe:Fried Green Tomatoes with Spicy Ranch Dressing

Banana pudding is a favorite Southern dessert as it’s cool, creamy and doesn’t require the oven — perfect for those hot Southern summers! It’s typically made with boxed pudding mix and vanilla wafers, but Trisha Yearwood’s recipe includes instructions for a homemade vanilla pudding. The whole treat gets topped with fluffy meringue.

Slow-cooked colard greens are a Southern staple. The process of cleaning and prepping the greens is key for making them deliciously tender and tasty. Cut the leaves from the tough center rib before slicing — the thinner, the better. Collards are traditionally cooked with smoked meat like ham hocks or turkey wings, adding an extra dimension of flavor to the bitter greens.

Chow chow is a uniquely Southern type of relish that can accompany any number of dishes or can be enjoyed on its own with chips or crackers. The combination of green tomatoes, peppers, sweet Vidalia onions and cabbage in a tart, vinegar dressing tickles the palate and can also go beautifully with other styles of food.

Get the Recipe:Southern Chow Chow

Shrimp and grits originated in the Southern low country — the area around the South Carolina and Georgia coasts. This is also the territory of the Gullah people, an African-American community who have maintained a strong African cultural identity. Saucy, savory shrimps on a bed of creamy grits is a soul-warming classic!

Get the Recipe:Kardea’s Gullah Style Shrimp and Grits

Red velvet cake is said to have gotten its name because the Dutch process cocoa originally used in this recipe gave the cake a reddish-brown hue. Modern red velvet cakes, like this one, get a little helping hand from red food coloring. This classic Southern cake gets covered in rich layers of cream cheese frosting.

Get the Recipe:Southern Red Velvet Cake

Southern meals typically revolve around the meat-and-three format: a meat main dish with several vegetable side dishes. These veggies are usually simply prepared with just a little butter, salt and pepper. Lima beans are a traditional side dish, and this recipe from Trisha Yearwood preserves their natural flavor with a simple seasoning.

Get the Recipe:Baby Lima Beans (Butterbeans)

Barbecue is one of the South’s most famous culinary treasures, and there are many regional styles of barbecue from the whole-pig Carolina style to the white sauce-smothered Alabama style. This recipe is made in the oven and calls for boneless pork shoulder, making serving a breeze!

Get the Recipe:Grandma’s Chopped Barbecue

Hush puppies are a favorite fritter enjoyed throughout the South and the perfect accompaniment to fried catfish. Traditional hush puppies are usually made with a plain cornmeal batter, but this recipe from Ayesha Curry incudes scallions for extra flavor.

These moon pies are made from graham cracker crumbs formed into a rich cookie dough. The cookies sandwich a gooey marshmallow creme filling, and the whole chewy sandwich cookie gets covered in a white chocolate glaze.

This is a simple recipe for pot roast that’s braised in a slow cooker. All you need are six simple ingredients and some patience. In eight hours, you’ll have fork-tender pot roast with a tangy, spicy kick from peppperoncini peppers.

Get the Recipe:Mississippi Pot Roast

After biscuits, cornbread is perhaps the definitely bread of the Southern United States. There are many versions of cornbread throughout the South, and some would argue that every cook has his or her own cornbread recipe they stand by. Cat Cora’s recipe leans more on the savory side and has a bit of tang from the addition of buttermilk.

Potato salad is a very popular summertime Southern side dish and an important part of picnics. But you can enjoy this creamy, rich salad any time of year. Pickle relish gives this salad a touch of sweetness.

Peaches are one of the things that Southerners look forward to the most in the summer. While Georgia is famous for its sweet, juicy peaches, this fruit abounds throughout the South. Peach cobbler is a favorite way to prepare this summer fruit, enhancing the flavor of the peaches with a light batter.

Get the Recipe:Easy Peach Cobbler

This recipe is a less common type of Southern gravy compared to the red-eye gravy that traditionally accompanies biscuits. Made with turkey drippings, the addition of chopped hard-boiled eggs not only thickens the gravy but also enhances the richness of the drippings.

Get the Recipe:Southern Egg Gravy

This bread pudding recipe is soft and custardy and infused with warming cinnamon spice. It gets a tart contrast from a mixed berry topping. Vanilla ice cream or whipped cream complete this sweet treat.

Get the Recipe:Southern-Style Bread Pudding

Grits are almost synonomous with the American South and a mainstay at breakfast time, although you can enjoy them at any time. At some point in time, someone had the genius idea of adding cheese to grits and a new Southern tradition was born. This rich recipe includes two types of cheese and is cooked in milk for an extra cramy mouthfeel.

Get the Recipe:Creamy Cheesy Grits

Get the Recipe:Calley’s Sweet Potato Pie

Catfish thrives in many of the rivers throughout the South, and catching (or noodling) catfish is a favorite regional pastime. The favorite way to prepare this fresh water fish is to fry it. Its firm flesh stands up to batters and breadings and makes it easy to pick up with your fingers like chicken tenders. This recipe’s batter is enriched by a flavorful amber beer.

Get the Recipe:Big Daddy’s Deep-Fried Catfish