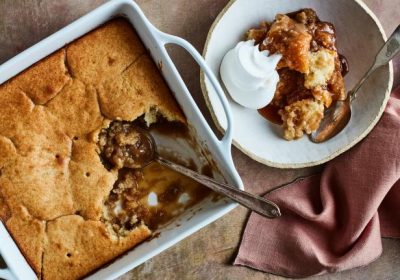 Pouding chômeur (or “pudding of the unemployed”) is a sweet, sticky cake from Quebec, Canada. It originated during the Depression as an easy and cost-effective dessert using pantry ingredients. Originally, you would make a simple sauce with brown sugar, flour and water, spread it on the bottom of a baking dish and then top it with a vanilla cake batter. Once the economy picked up, maple syrup was introduced into the sauce and it quickly became a key ingredient. The result is a super moist cake that you serve warm, sauce-side up, preferably with a dollop of whipped cream and some fresh berries.

These apple-packed cupcakes are topped off with a delicious golden meringue crown for a seasonal treat that’s sure to impress.

Get the Recipe:Apple Meringue Cupcakes

Get the Recipe:Mini Banana Beignets

Get the Recipe:Skillet Apple Pie with Cinnamon Whipped Cream

We add a little Greek yogurt to our pumpkin cheesecake, making it denser, creamier and the absolute perfect amount of sweet.

Get the Recipe:Pots de Creme

Concord grapes are in season during September and October. They have thick skins and a distinctive syrupy sweet taste which makes them perfect for desserts.

Get the Recipe:Concord Grape Layer Cake

Ree’s quick and easy apple tart will impress guests but is a cinch to make. It takes only 30 minutes to put together (thanks to sheets of puff pastry and store-bought caramel sauce), but it’ll look like you spent hours on it.

Get the Recipe:Quick and Easy Apple Tart

Break open these oversized cookies, fragrant with pumpkin and spice, to reveal a soft interior with a beautiful swirl.

Get the Recipe:Apple Crumble with Vanilla Ice Cream

Get the Recipe:Apple Brown Butter Tart

One bite of this cranberry-pear filled galette and your tastebuds will be tingling. The homemade crust features toasted pecans, which bring a nice buttery nuttiness to the otherwise fruity dessert.

Get the Recipe:Cranberry-Pear Galette with Pecan Crust

Super-soft bananas are nice and sweet (green bananas have no place here). Keep them a bit chunky once you mash them so you can get little bits of banana in your bread. Damaris Phillips adds many of the flavors of a traditional bananas Foster dessert (like rum and brown sugar) to this glazed treat, too.

Get the Recipe:Bananas Foster Bread

Get the Recipe:Caramel Apple Pie

Get the Recipe:Boozy Blondie Milkshakes

A spiced apple filling tops these buttery cookies, packing all the flavor of an apple pie into a single bite — for a fraction of the work!

Get the Recipe:Apple-Raisin Cinnamon Bun Pie

Get the Recipe:Pear Cobbler with Cranberry Streusel

Deep-fried apple pies in a just-for-one size? Yes, please! This recipe will show you how.

Get the Recipe:Fried Apple Pies

Make a batch of this seasonal butter and store in airtight container in the fridge for up to five days. Try it on everything from slices of pound cake to buttery shortbread cookies.

Get the Recipe:Homemade Apple Butter

Get the Recipe:Caramel Apple Cake

Get the Recipe:Chocolate Pear Pouches

Get the Recipe:Free-Form Fruit and Nut Pies