Home » Recipes » 28 Stuffed Pepper Recipes That Are Guaranteed to Please

28 Stuffed Pepper Recipes That Are Guaranteed to Please 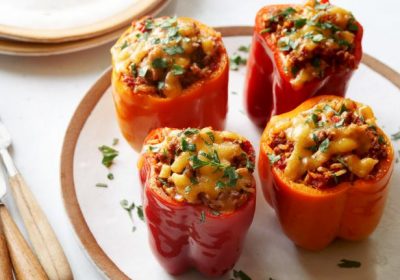 Whenever you’ve got an abundance of one ingredient on hand, it can be difficult to know how to use it up. Not with bell peppers, though! These colorful beauties are the perfect vessel for holding whatever you’ve got on hand — ground beef, rice, cheeses and more. Packed full of everyone’s favorite add-ins and cooked until tender, they become the perfect family-friendly meal. A dish with seemingly unlimited variations, stuffed peppers are one of our favorite comfort foods any way you make them. Fill them with whole grains, top them with feta or give them a Tex-Mex twist — they’re always a win. You can even make them in the Instant Pot for classic flavor in a fraction of the time!

Get the Recipe:Instant Pot Stuffed Peppers

We’ve made this classic easier and faster by using the microwave to par-cook the peppers, saving you about 45 minutes of cook time! This is a great recipe to use up leftover rice. Be sure to really pile in the filling (mounding it is ok) as it will shrink as it cooks.

Get the Recipe:The Best Stuffed Peppers

A flavorful blend of spinach, bulgur and lean ground beef fills these sweet red peppers, which are sprinkled with feta cheese and baked until tender.

Get the Recipe:Greek-Style Stuffed Peppers

This dish looks particularly vibrant when you use a combination of sweet yellow, red and orange bell peppers. Pick the largest ones you can find, with the flattest, most stable bottoms so they remain standing once they’re stuffed and baked in the tomato sauce. These peppers are delicious hot out of the oven or served Mediterranean-style at room temperature.

Get the Recipe:Healthy Vegetable and Couscous Stuffed Peppers

Enjoy the flavors of sizzling fajitas (a Tex-Mex favorite) in a stuffed pepper, which replaces the flour tortillas commonly used.

Ree Drummond stuffs tricolored bell peppers to the max with savory sauteed beef, wild rice and sauteed vegetables for a filling yet low-maintenance dinner. It gets better: They’re just as excellent for lunch the next day.

Get the Recipe:Stuffed Bell Peppers

Get the Recipe:Vegan Stuffed Peppers

Stuffed peppers are a comfort food classic. My lightened-up version keeps everything you love (the tender peppers, the flavorful cheese and the aroma the floods your kitchen) while putting a fresh twist on this timeless dish. It all pays tribute to my time living in Spain, with ingredients that will transport you to the Mediterranean. Serve with a glass of Tempranillo for the perfect dinner.

Cook brown rice with wheat berries and mix the grains with a spicy peanut sauce, then stuff split bell peppers and bake.

Get the Recipe:Stuffed Peppers with Wheat Berries

Stuffed bell peppers have never been simpler to prepare, thanks to your slow cooker! Just stir all the filling ingredients together (raw ground beef included), then stuff the mixture into the peppers and let the cooker do the rest. Top with sour cream for a comforting, nourishing dinner your whole family will love.

Get the Recipe:Slow-Cooker Stuffed Peppers

Brown rice, dried currants and walnuts add excellent hearty texture to these turkey-stuffed bell peppers. Serve the peppers with a simple side salad for a wholesome and well-rounded weeknight dinner.

Get the Recipe:Turkey-and-Rice Stuffed Peppers

“Turkey, quinoa and kale make this a real-deal stuffed pepper — but it’s still light and healthy,” says Guy Fieri. To elevate your pepper presentation, try serving these flavor bombs with a drizzle of Guy’s zesty Tomatillo-Avocado Sauce on each plate.

Get the Recipe:Turkey and Quinoa Stuffed Peppers

Precooking these peppers from Food Network Magazine in the microwave ensures that they are simple to prepare in a hurry. The andouille sausage-studded filling promises bold Cajun flavor.

Get the Recipe:Cajun Stuffed Peppers

These tricolored bell peppers are stuffed to the brim with savory ground veal, garlic and long-grain rice.

Get the Recipe:Spanish Stuffed Bell Peppers

For a celebratory appetizer, Guy fills jalapeno halves with Italian ingredients like sausage, Parmesan and mozzarella. You’ll want to broil these just until the cheeses turn gooey.

Get the Recipe:Italian Stuffed Jalapenos

These sweet bell peppers, loaded with nutty whole-wheat couscous, browned beef and plump golden raisins, are the foundation of a well-rounded dinner. The bold colors of the antioxidant-packed bell peppers aren’t just for decoration; the more bright colors on your plate, the healthier your meal.

If you don’t have time to prepare stuffing from scratch, consider repurposing your leftovers. This recipe from Food Network Magazine stuffs sweet bell peppers with leftover ragu and tops them off with grated Asiago cheese.

Get the Recipe:Quinoa and Vegetable Stuffed Peppers

Oregano, cinnamon and cumin help to boost the flavor of these lighter-than-usual stuffed peppers, filled with lean ground beef, brown lentils and rice.

Get the Recipe:Lightened-Up Stuffed Peppers

“Risotto is delicious stuffed in either peppers or squash, so keep that in mind if one looks better than the other at the market,” Rachael advises.

Get the Recipe:Risotto Stuffed Peppers and Zucchini

Stuffed with turkey and smothered in marinara sauce, these meaty bell peppers are just the meal you’ll crave during comfort food season. In the summertime, zucchini makes an excellent substitute for the peppers.

Get the Recipe:Stuffed Zucchini and Red Bell Peppers

These peppers, filled with Israeli couscous, lentils, olives, herbs and plenty of feta, were inspired by a classic Mediterranean salad.

Who said you have to cook your peppers? These creamy and crunchy stuffed raw peppers are perfect for a packed lunch. Use scallion instead of parsley or deli turkey instead of ham for a variation.

Get the Recipe:Cream Cheese and Ham Stuffed Peppers

Cook red and yellow baby bell peppers in a skillet until the skins blister, then stuff them with ground pork and Muenster cheese to add extra smokiness. Use the same skillet to cook the meat — it’ll cut down on the meat’s cook time in the oven.

Get the Recipe:Stuffed Baby Bell Peppers

“Poblanos are known for their heat, but [they] are rarely celebrated for their glorious floral notes and great texture,” says Alex Guarnaschelli. This dish brings those lesser-known qualities to the forefront with the help of its crunchy panko, mozzarella and sauteed vegetable filling.

Get the Recipe:Stuffed Poblano Peppers

Succulent ground lamb and tender orzo combine to create the very rich and comforting filling for these stuffed-to-the-max peppers.

Get the Recipe:Lamb and Rice Stuffed Peppers

“The stuffed peppers can be covered and refrigerated for a make-ahead meal,” Rachael says of this timesaving recipe. Put leftover meatballs to work and combine rice and orzo pasta for a satisfying supper.

Get the Recipe:Stuffed Peppers with Broken Meatballs and Rice