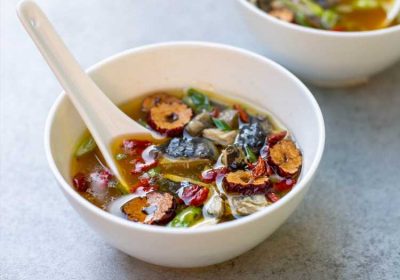 Moving to New York City as a 19-year-old was the loneliest experience I’ve ever had. I only had one friend (my new roommate), so without a safety net of family and friends, I turned to cooking as both a path to (semi-forced) social interaction and a way to carve out a new identity. In particular, I learned how to be comfortable being alone: to sit quietly in my little bedroom and enjoy chicken and rice from the famous halal cart, way before they existed as a chain; to hum to myself as I meandered through the greenmarket looking for root vegetables, or along the sidewalks of Chinatown searching for fresh fruit. And when things were extra hard, like when I saw photos of college friends gathered for a group reunion and I realized I was solidly out of their lives, or my roommate informed me she decided to move back to Texas, I made myself herbal silkie soup.

I ate my fair share of traditional Chinese medicine (T.C.M.) tonics, soups, and remedies growing up, but rarely ever this one. Silkie chickens, with their higher price and lower yield, didn’t make sense to feed the three generations in my household. But on my own, with only my hunger to worry about, I was tempted by the little packages in the meat aisle. Buying one was a novelty, an act that made even the gloomiest, coldest day in the city a reason for an individual celebration. The process was a fast one—if done in the pressure cooker given to me by my mother, just 30 minutes with all the ingredients at high pressure—and I was curled up in my duvet with a bowl of soup and Law and Order: SVU playing on repeat in the background.

Food is healing, and not just emotionally. Silkie herbal chicken soup, or 乌鸡汤 (wū jī tāng), as Zoey Gong, a T.C.M. chef and founder of Five Seasons TCM Zoey Gong tells me, is specifically considered medicinal because of its effects on the body: nourishing the liver (yang gang), benefiting your overall qi, which the Chinese consider the essence of life (yi qi), and replenishing blood and yin energy (zi yin). In the T.C.M. world, silkies and other breeds of chicken are categorized as ‘sweet’ in flavor (there are five flavors in total: sweet, sour, bitter, spicy, and salty) and ‘neutral’ in effect as they don’t warm or cool the body (for context, a food like watermelon is considered cooling while cinnamon is considered warming), making it an ideal base for soup.

It’s unclear where these blue-grey–skinned, poofy white-feathered chickens first originated beyond being native to South China, but those raised in Taihe County, in Jiangxi Province, are considered the best in class now. Gong tells me they reached peak fame in the Qing dynasty, where silkies were used as a tribute for the emperor (they later also appeared in the Panama-Pacific International Exposition of 1915). One thing that’s certain is the intensely concentrated flavor of a silkie delivers one of the best ratios of chicken size to flavor.

There are endless variations on silkie herbal soup, changing with the seasons (what you eat is meant to be in balance with the weather outside), the ailments of the intended recipient, and the region. The most famous is one that follows T.C.M.’s practices for women’s health, consisting of jujube (which governs digestion and helps the spleen and stomach), donkey hide gelatin (a very specialty ingredient meant to replenish blood), mulberry (to counteract declining kidney function related to menopause), and longan fruit (which has a calming effect, and is sweet and warming).

However, Gong has plenty of other suggestions. “If it’s summer and hot outside, you want cooling herbs to remove dampness in the body. Pearl barley is good for that,” she tells me, “while in the winter, add more warmth with ginger and warming spices like star anise and black cardamom.”

Each region in China offers its own individual take as well: “Sichuan, which is known for its high humidity, is known to add dry and numbing chiles to combat the moist, heavy air,” says Tiffany Ran, food writer and chef of Babalio popup in Seattle. “In Dongbei, there is an abundance of large, sweet Napa cabbage. In Yunnan, fragrant mushrooms and the region’s most famous cured ham will make it into this soup.”

Silkie herbal soup embodies the idea of giving and nurturing, so it’s unsurprising that it’s most commonly prepared for new mothers and sick family members. As silkies are almost always sold with head and feet attached, the resulting broth is particularly creamy and full of nutritious collagen. In fact, it’s become so popular as an antidote for poor health that there are even pills made from dehydrated, ground silkies with a medley of herbs. It can also be served at celebrations and used to greet important guests, given the expense of its ingredients.

Personally, I find my version of the soup, published below, to be the most comforting, with its generous addition of date-like jujubes; sweet goji berries (which are good for the eyes and support the liver and kidneys); ginger; shiitake (while not a T.C.M. herb, mushrooms are generally regarded as nourishing for the yin); and angelica root, a warming, aromatic, and sweet dried supplement that looks somewhat like thinly peeled and dehydrated sunchokes. “I’m glad you like this herb,” Gong says with a laugh when I tell her about this during our interview. “It’s definitely an herb meant for women, as it makes your blood alive (‘huo xue’) and harmonizes it with your body.”

Much like the soup itself, preparing and cooking silkie herbal soup is a soothing process. Fei shui, as Ran explains, is the practice of removing blood and impurities from proteins before starting the full cooking process. For delicate silkie soup, one way to do this is to par-cook the chicken and “let it sit in a bowl of cold water for a few minutes [so] any extraneous coagulated blood will surface and can be easily washed off and disposed.”

After that, it’s all about long, slow cooking—“almost sous vide,” as Gong describes it—where the chicken is gently stewed with the herbs until “even the bones are soft.” In my recipe, I add the cheffy step of separating the tender meat from the carcass as soon as it’s cooked through before returning the carcass to the broth for the long simmer; this helps prevent the meat from drying out while also ensuring a rich broth. The soup’s final flavor is subtle yet mesmerizing; the aim is for it to be “pure,” as Gong says, by extracting nutrients over a very lengthy period.

Over and over again, I’ll find myself reaching for silkie soup in times of need. It’s lasted me well beyond the windowless bedroom of that first NYC apartment, as comforting today as I cook a batch for my husband and me while we grieve for our dog, who just passed from cancer, as it was when I was all alone. Eating a spoonful is the reminder we need that we are loved and worthy of something this special.

Silkie chickens are often sold cleaned, but with their collagen-rich feet and head still attached; leave those parts on for a silkier soup.

White soy sauce is a Japanese, light-colored soy sauce. While not a traditional Chinese ingredient, its light color and flavor work well with the soup.

The broth and chicken can be refrigerated together for up to 5 days. Reheat gently and prepare garnish shortly before serving.