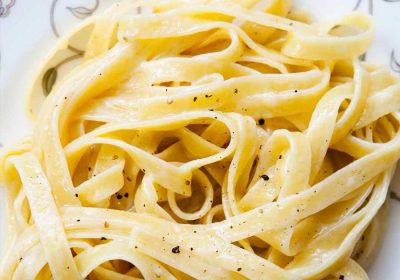 Fettuccine Alfredo two ways: with cream and nutmeg, or with butter and Parmesan! Try it both ways and decide which one you like the best!

Mmmm. Fettuccine Alfredo. So simple, but so so good.

Most of us in America know this dish in its cream-based form, with a little nutmeg sprinkled on top.

But did you know that the original fettuccine Alfredo sauce didn’t use cream? Just butter, Parmesan, and black pepper.

The “Alfredo” in fettuccine Alfredo is Alfredo di Lelio who operated a restaurant in Rome. Legend has it that he fancied up a basic pasta with butter-and-cheese to appeal to his wife, who was suffering from morning sickness. When he later served it at his restaurant, it was a hit, and fettuccine Alfredo was born.

Americans can thank Hollywood for our love of this simple Alfredo sauce.

In the late 1920s, movie stars Douglas Fairbanks Sr. and Mary Pickford ate at di Lelio’s restaurant while on honeymoon in Rome, and brought the dish back to the States.

Fettuccine Alfredo has been here ever since. Somewhere along the way, it morphed from a simple butter and Parmesan Alfredo sauce into a creamy version; how that happened is anyone’s guess.

I present both Fettuccine Alfredo versions here — the classic and the creamy. Both taste great! Whether you make one or the other just depends on what you feel like eating. Making the creamy version is just a matter of adding some cream to the sauce’s butter as it melts, and sprinkling with nutmeg instead of black pepper.

While I’ll usually choose fresh pasta over dried if given a choice, for this dish, I recommend using dried pasta. Dried pasta is firmer and will hold up better to the sauce. That said, you can use fresh pasta if you prefer, just cook it al dente.

What to serve with Fettuccine Alfredo

Serve Fettuccine Alfredo alongside baked or grilled chicken breasts, grilled or sautéed shrimp (like our shrimp scampi), a simply dressed crisp green salad, and a dry white wine. The pasta is already rich with butter and cheese (and cream if you are making that version), so something light and slightly acidic will help cut through the richness of the pasta.

Fettuccine Alfredo is the best served as soon as you make it, but it will keep, covered, in the fridge for up to 5 days. It can be reheated with a little bit of water or butter in a saucepan over low heat. It typically does not freeze well.