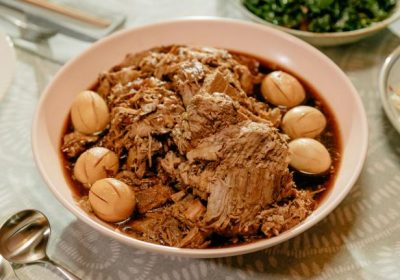 Family recipes always come with the best cooking tips and Molly’s Grandma’s Tepong Pork is no exception. Molly sears the pork shoulder fat-side down first — so that the rendered fat in the pan helps to flavor the rest of the roast when she flips it over.

These dim sum-worthy dumplings may be delicate but they’re packed with flavor, thanks to a variety of ingredients like mushrooms, scallion, ground pork and ginger.

This spicy, aromatic Sichuan dish is recognizable from the citrus aroma of Sichuan peppercorns and the spicy fermented flavor of hot bean sauce.

Congee, or jook in Cantonese, is a nutritious rice porridge that is usually eaten when someone isn’t feeling well. The simplest version of congee is made with just rice, water and salt, so it is easily digestible and a blank slate for any flavor. There are many varieties of congee; ours focuses on the popular combination of salted pork and century egg.

Get the Recipe:Salted Pork Congee with Century Egg

Molly says, “Xiao long bao, or soup dumplings, are Chinese steamed dumplings that have soup inside of them. They are like magic! I grew up eating these with my family at our favorite dim sum restaurant in Chicago’s Chinatown and later learned how to make them by combining my family’s go-to pot sticker recipe with the secret ingredient: soup gelatin, which melts down into soup once the dumplings are cooked.”

Get the Recipe:Pork Soup Dumplings

To achieve the crispiest roast pork, rub a mixture of baking soda, salt and water over the skin of the pork before boiling.

A blend of Chinese pantry and refrigerator staples give these sweet-and-savory pork buns their flavor: soy sauce, sesame oil, garlic and ginger — to name a few.

Get the Recipe:Sugared Pork Buns

Long before she became the executive dim sum chef at the Wynn Las Vegas Hotel, Sandy Shi learned techniques from her mother. These chive dumplings, which Sandy makes using homemade wrappers, are one of her go-to recipes.

Get the Recipe:Pork-and-Shrimp Chive Dumplings

The most important part of a char siu bao is the filling! When rolling out the dough for the bun, flatten it into a pancake to make it easier to portion the pork equally — so that every bun has plenty of flavor.