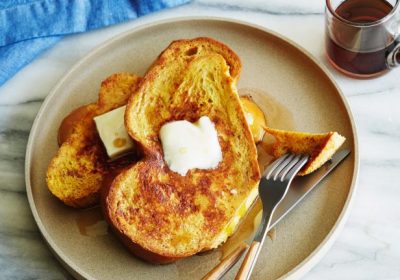 Robert sticks to the basics with his classic cinnamon-and sugar French Toast. For hearty, fill-you-up slices, use thick-cut challah or brioche.

The beauty of Molly’s crowd-pleasing French toast casserole is that it can be prepped the night before — so all you have to do in the morning is pop it in the oven.

Get the Recipe:Baked Challah French Toast

Overripe bananas? Make an extra loaf of banana bread so you can transform it into this easy French toast.

Get the Recipe:Banana Bread French Toast

Our favorite bread for making French toast is pain de mie for its neutral flavor and spongey texture, which helps it absorb the egg mixture without falling apart. It’s sometimes hard to find, so you can substitute brioche for a richer and more decadent toast or challah for an all-purpose choice.

Get the Recipe:The Best French Toast

We’ve made firing up your grill in the early AM worth it with this easy twist on a breakfast classic. A lightly buttered foil pack steps in for the traditional skillet and cuts way down on the fat for cooking. For campground cooks, we used canned non-fat evaporated milk (it’s one less thing to keep cold). Go for the non-stick foil to prevent sticking and burning.

There are a few tricks to making great French toast: Use stale bread (fresh tends to fall apart), make sure the bread is sliced at least 3/4-inch thick (it helps maximize soaking for a custardy interior) and watch your soaking time (a shorter time equals a slightly drier toast, a longer time yields a more custardy one).

Get the Recipe:Classic French Toast

There’s no need to get up early on the weekend to make breakfast. With this rich, custardy French toast casserole, nearly all the prep is done in advance. Simply assemble and refrigerate overnight. About an hour before brunch time, just pop it into the oven. Whip up a fast and easy banana-caramel topping and bask in the praise of your well-fed family members.

What we love about French toast: the fluffy, custardy center and contrasting crisp, golden edges. This vegan recipe replicates those heavenly qualities — and is just as speedy to whip up as the OG version.

We set out to make a stuffed French toast that is easy to prepare on a cookout using a pie iron but doesn’t require space in your cooler for perishables. What we came up with was exactly that — and also vegan, for a delicious double whammy!

Get the Recipe:Pie Iron Peanut Butter and Jelly French Toast

Start the day on a sweet note with this ultra-decadent dish. Bobby uses bakery-purchased chocolate-hazelnut babka for a twist on the traditional French toast, then caramelizes bananas for an extra-special topping.

Get the Recipe:Chocolate-Hazelnut Babka French Toast with Caramelized Bananas

Bring a new dimension (three-dimensions, in fact) to French toast, rolling it up and stuffing it with goodies. Follow this kid-friendly base recipe, then choose from the filling options for an easy portable breakfast.

Get the Recipe:French Toast Roll-Ups

No need to choose between sweet or savory for breakfast. This easy bake is a blend of French toast and that hearty, egg-topped grilled ham sandwich, the croque madame.

This easy recipe serves up a double dose of decadence. First, it’s made with fluffy, thick-cut bread. Second, it’s sprinkled with cinnamon-sugar while it’s still in the pan for a sweet, caramelized crust.

Ina keeps it simple when making her fluffy Challah French toast, adding just a little orange zest and vanilla to elevate the flavors. Her recipe has all the best features of the classic, but is effortlessly extra-special.

Get the Recipe:Challah French Toast

The buttery coconut-almond crust makes this French toast casserole truly special and offsets the creamy, fluffy texture of the bread. You’ll want to assemble the dish the day before to give the bread time to soak in the custard.

Get the Recipe:Coconut-Almond French Toast Casserole

No skillet-or stovetop-required for quick, decadent French toast. Waffling creates two textures: thin and crunchy and thick and fluffy, for variation in every forkful.

Get the Recipe:Waffled Brioche French Toast

One of the keys to successful French toast, vegan or not, is using day-old, stale bread-fresh bread is too soft and more likely to fall apart. This recipe makes a slightly drier French toast. For a more custardy version, let the bread soak in the milk-yogurt mixture for about 2 minutes per side.

Get the Recipe:Vegan French Toast

Ree gives her homemade French toast sticks a nice, crunchy crust by coating them in cereal crumbs. For best results, use a sweetened corn cereal, like Cap’n Crunch.

Get the Recipe:Crunchy French Toast Sticks

Make French toast for a crowd by layering it in a baking dish and soaking overnight. It couldn’t be easier!

Get the Recipe:Berry French Toast Casserole

We’ve made French toast savory by swapping a creamy spinach sauce for the maple syrup. It’s the best of both worlds!

Get the Recipe:French Toast Florentine

Who says you can’t cook breakfast on the grill? Prep the apple-berry compote and apple-mascarpone ahead of time and enjoy breakfast outside with grilled French toast.

French toast just got brûléed (and it will never be the same): Thick and custardy slices of bread are finished with a crackly sugar crust. A milk-enriched maple syrup sauce is the perfect drizzle.

Get the Recipe:Crème Brûlée French Toast

Molly makes her own bread for her berry-and-cream-cheese-stuffed slices — but you could easily use store-bought if you don’t have time to bake a loaf.

Get the Recipe:Strawberries and Cream Stuffed French Toast

This handheld version of a breakfast favorite is served with grilled bacon and warm maple syrup for the ultimate sweet and salty treat-no knife and fork needed! Lining the grill with foil ensures that the French toast cooks all the way through without burning, while covering the grill lets the toast acquire a nice touch of smoky flavor.

Get the Recipe:Grilled French Toast Kebabs

We fry and bake English muffins to create a crispier version of classic French toast. Layer muffin halves with tart lemon sugar and strawberries, then top with more berries, yogurt and honey.

Get the Recipe:Strawberry Shortcake French Toast