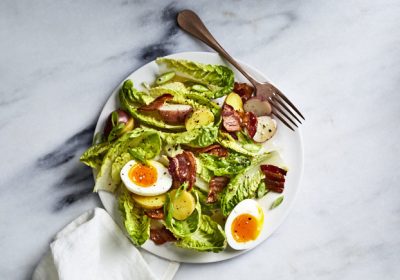 Until recently, my father’s side of the family was never where I looked for culinary inspiration. Although he’s lived in New York City for most of his adult life and is now a good cook, my father comes from a multi-generational, predominantly Pennsylvania Dutch working-class family where food was for the most part functional.

His mother, my Nana, was solely responsible for getting meals on the table for my father, his two sisters, and my Pop Pop, who worked in construction close to Allentown where they lived. Nana wasn’t known for being the best cook, but she did have a few solid tricks up her sleeve. I have memories of sitting in her kitchen while she made us buttered ham sandwiches with white American cheese served with beet-pickled eggs, which we thirstily washed down with cold A-Treat Birch Beer. On other visits it was sloppy joes on Martin’s potato rolls with sweet-and-sour pickles and potato chips. Her dinners for large family gatherings were straightforward: ham or roast beef, mashed potatoes with gravy, a plate of sliced tomatoes and cucumbers from my grandfather’s garden. But there was one recipe where she really shone: her salad of lettuces topped with a hot bacon dressing. It was requested for every gathering.

My Aunt Kay tracked down my Nana’s handwritten recipe, and I’ve made it my own, incorporating jammy eggs into the salad, and adding some boiled potatoes so it can act as a more substantial meal. It’s a perfect late spring dinner. Serve it with some good cheese and crusty bread, and you really don’t need much else.Devoted to her faith, my Nana never imbibed, but if she did, I bet she’d have wanted something that was highly drinkable, uncomplicated and delicious, such as a vinho verde, which is bright and lively, and plays well with everyone, just like she did.

Bring a large pot of well-salted water to a boil; add potatoes, and carefully add eggs. The eggs will be jammy at around 7 minutes; if you prefer firmer yolks, leave them in for another 1 to 2 minutes. Remove eggs with a slotted spoon, and run under cold water to stop the cooking process. Peel and slice eggs in half lengthwise. Set aside. Cook potatoes until easily pierced with a fork, 5 to 7 more minutes. Drain and run them under cold water until cool. Cut potatoes in half lengthwise, and sprinkle with 1/4 teaspoon kosher salt. Set aside.

While eggs and potatoes cook, cook bacon in a 12-inch skillet over medium until crispy, 5 to 7 minutes. Remove and set aside on a paper towel–lined plate. Remove from heat, and let rendered fat cool slightly, 1 to 2 minutes. While still warm, whisk in vinegar and brown sugar, stirring until sugar dissolves. Stir in remaining 1/4 teaspoon kosher salt and remaining 1/4 teaspoon pepper, and set aside.

Add potatoes, half of bacon, and half of dressing to the lettuce, and toss gently to coat. Top with eggs, and scatter with scallions and remaining bacon. Drizzle with remaining dressing as desired.